What's on your menu tonight: beef stew, barbecue chicken or pork chops? Suppose it was monkey, gazelle or porcupine? With the spectacular increase in the world's population and the growing demand for exotic delicacies, the planet's forests and oceans are becoming vast supermarkets where we can help ourselves to whatever we choose. But these are hardly inexhaustible resources, and soon the shelves may well be empty!

Wild meat is and has always been a source of subsistence for many of the world's populations. It is often less expensive and more accessible than domestic meat, particularly in poor rural communities. As well, it is traditionally associated with cultural celebrations and religious ceremonies, a bit like turkey at Christmas or American Thanksgiving. The problem lies in that hunting is often excessive and uncontrolled, directly threatening the long-term survival of numerous animal species and, consequently, biodiversity. The phenomenon is all the more alarming in that part of this meat now goes to supplying world markets. About 2 billion dollars worth of wildlife is believed to be carved up each year! To satisfy gourmet palates, owners of underground restaurants in New York, London, Brussels, Paris and even Toronto include these exotic, unusual meats on their menus. The specialty du jour? Monkey tartar with a side of ostrich pâté! Plates fill, forests empty out and little by little, the sound of firearms replaces the sound of wildlife. 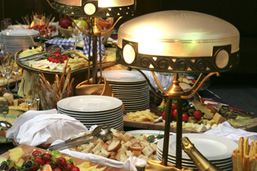 World portrait of a disturbing phenomenon

Here, the product of the hunt goes by a particular name: bushmeat. It is estimated that 50 to 80 million people worldwide consume meat from this region of the globe. The quantity of game killed annually in central Africa corresponds to about 9 billion hamburgers. Primates are especially prized: gorillas, chimpanzees, mandrills and bonobos find their way into casseroles along with crocodiles, pangolins and elephants. In the countries of the Congo basin alone, the bushmeat sold is estimated at a million tons a year! In one year, in the capital city of Brazzaville (Congo) alone, shelves offered the meat of close to 293 chimpanzees; during the same period, 800 gorilla carcasses were sold to consumers. Massive deforestation and the development of new roads expose animal populations that were previously inaccessible in preserved areas. 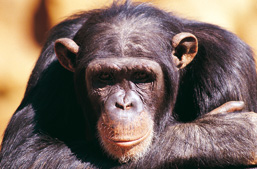 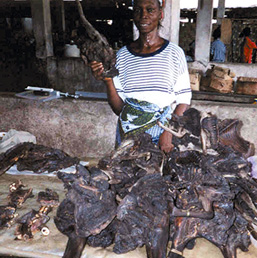 Asia, with its 4 billion people, has the largest population on earth. Food requirements are enormous, and go hand in hand with the hunger for wild meat! Seafood - turtles, sharks and even whales – is especially prized! Turtle soup and eggs are overwhelmingly popular, and 10 million catches are needed annually to keep up with demand. Although a number of farms exist, most of these reptiles come from nature. Whale meat is considered a prestigious commodity. The growing craze for shark fin soup in Asia has been a major cause of increased illegal fishing, thus contributing to an alarming reduction in whale populations. It is estimated that close to 100 million sharks are captured each year to satisfy the market. Between 2006 and 2007, for example, 350 illegal fishing vessels carrying a total of 1.6 tons of shark fins were intercepted. Shark finning, cruel and wasteful, is the process of cutting off fins of live sharks and discarding their body at sea, where they die a slow, agonizing death. Scientists believe that one shark species in five is in danger of extinction. 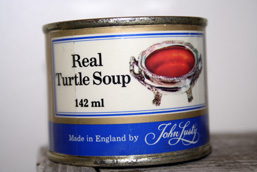 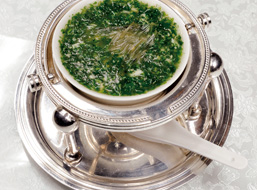 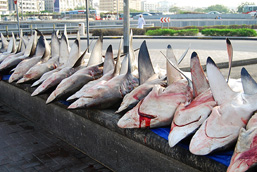 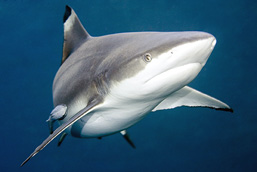 Great Britain is the entrance way for an estimated average of over 7,400 tons of wild meat! Illegal, this meat is sold to specialized restaurants and grocery stores and relabelled (for example, horse steak instead of zebra steak), or introduced into the network of underground businesses. In 1999, a chic establishment in Brussels (Belgium) was serving a boiled meat called "makaku." A laboratory analysis of the dish revealed it consisted of meat from a primate's arm! Also in Brussels, inspectors were surprised to discover chimpanzees, antelopes and porcupines hanging from a shop ceiling.

To find poachers, it isn't necessary to travel far: Canada, too, is forced to take measures to protect its wildlife from unscrupulous hunters. A poaching activity includes catches above the legal limit, hunting or fishing out of season or in closed areas and targeting endangered species. It is estimated that in Canada, poachers' catches equal legal catches in number. For an idea of what this represents, note that in Quebec alone, in 2007, about 50,000 White-tailed Deer, 25,000 Moose, 4,500 American Black Bear and 13,500 Woodland Caribou were hunted legally. If that same amount was hunted illegally, and we multiply this by the number of provinces and territories, then it becomes obvious the authorities have their work cut out for them! Unfortunately, the country is vast and wildlife officers responsible for overseeing our wildlife heritage face a formidable challenge. Poachers are cunning, organized and underhanded, and it's not always easy to catch them in the act: in Quebec, over a period of two years (2005-2007), wildlife officers seized a mere 78 large game animals (deer, moose, caribou)! Moreover, sentences for poaching activities are often limited to fines, suspended hunting permits and confiscation of the offenders' weapons and vehicles. 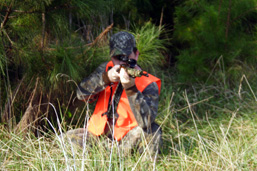 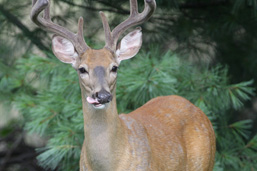 But the determined efforts of officers, coupled with meticulous investigations, occasionally result in a few good hauls: March 2004 saw the largest seizure ever of illegal wild meat in Quebec: 22,000 kg of game evaluated at close to $400,000. Those responsible pleaded guilty to 75 counts and received fines of $125,000.

In March 2006, wildlife officers from Environment Canada collaborated with the United States Fish and Wildlife Service (FWS) to dismantle a major illegal operation involving Queen Conch (also known as the Giant Conch). The meat of the protected mollusc, which comes from the Caribbean Islands, entered North America under a different label. Painstaking inspections allowed for the seizure of 120 tons of mollusc meat, including 27 in Canada alone. 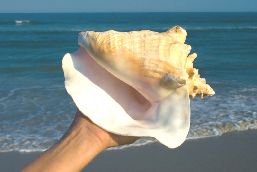 Poachers should be warned: it's now open season on poaching, and Canadian authorities have them in their line of sight!

Certainly, the plague of excessive catches associated with the wild meat trade is not a phenomenon unique to poor tropical countries. It entails heavy consequences for all ecosystems including habitat destruction, loss of biodiversity and vanishing species. In certain regions of the globe, large predators find themselves without resources, given that their prey of choice ends up in our plates. The same is true for members of rural communities who, for the most part, live well below the poverty line. For these individuals, feeding themselves is a task renewed each day, and they risk losing a major source of protein. It is estimated that, for every animal hunted for subsistence, 10 are hunted for purposes of trade. 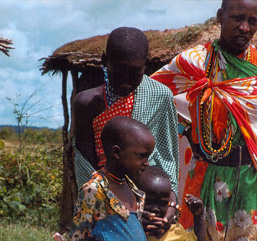 The illicit consumption of wild meat also raises major concerns regarding human health. Often carved, wrapped and transported in conditions of dubious hygiene, this commodity can transmit viruses and bacteria to those who consume it. The Ebola virus is among these potential risks, and represents one of the most fatal viral illnesses known: between 70 and 90% of those infected die within 2 weeks. In March 2003, the World Health Organization (WHO) confirmed 92 cases of Ebola fever in Gabon and the Democratic Republic of Congo. The media reported that the epidemic began in the home of a Gabon family that consumed monkey meat.

Canada can count on the Canadian Food Inspection Agency (CFIA) to oversee public health and the quality of the food that crosses our borders. Regulations and controls are strict - but not without loopholes.

So then, what's on your menu tonight?

Examples of headlines across the country

Fish, wildlife trafficker fined $44,850
Edmonton – In Lac La Biche, a man was fined after pleading guilty to one count of fish trafficking and 5 counts of game trafficking.

Commercial fisher charged with fishing with overly long net
Fisheries and Oceans Canada announced today that Mackenzie Matheson of North Vancouver received a fine of $6,325 for fishing with an overly long net. The investigation showed that the net measured 263.5 metres, or 44% longer than the legal size (183 metres).