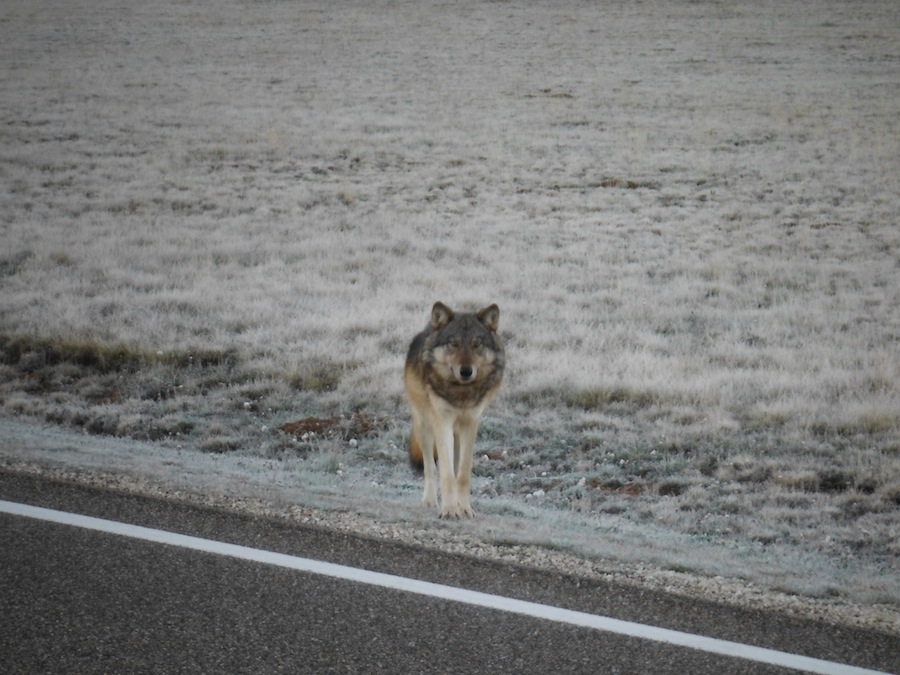 This wolf, photographed near the Grand Canyon in October, is feared to be dead after a coyote hunter in Utah mistakenly shot a gray wolf in Utah over the weekend.

Credit: Courtesy of the Center for Biological Diversity

DNA tests have confirmed that an endangered gray wolf killed in Utah in December was the same lone wolf that had been spotted and photographed near Arizona's Grand Canyon, the U.S. Fish and Wildlife Service (FWS) announced this week.

Gray wolves hadn't been seen in Arizona since the 1940s, but this past fall, wildlife officials began tracking a wayward wolf near the North Rim of the Grand Canyon.

A coyote hunter shot the wolf near the south end of the Tushar Mountains near Beaver, Utah, on Dec. 28. When the hunter realized his kill was a wolf and not a coyote, he alerted state officials and FWS began investigating the case. [In Photos: The Fight Over Gray Wolves' Endangered Status]

The 3-year-old female wolf had been collared near Cody, Wyoming, in January 2014, meaning it traveled at least 750 miles (1,200 kilometers) to get to Arizona in less than a year. It's not unusual for gray wolves to wander such distances alone.

Gray wolves vanished from most of the continental United States by the mid-1900s. But wolves have been making a comeback in the last few decades because of conservation laws like the Endangered Species Act and reintroduction programs like the one that famously brought wolves back to Yellowstone National Park in the 1990s.

There are now more than 5,000 gray wolves in two major populations: one in the northern Rockies, the other in the western Great Lakes states. Many wolf advocates hope the populations will keep expanding, but they are dealing with an ever-changing patchwork of laws governing the fate of the species.

Gray wolves had been locally removed from the Endangered Species list in the northern Rockies and the western Great Lakes regions in the last decade, and some states even introduced gray wolf hunting seasons to control the animals' population and protect livestock. But in December 2014, a federal judge ruled that gray wolves should be put back on the Endangered Species list in the Great Lakes region, effectively prohibiting wolf hunting in Minnesota, Wisconsin and Michigan.

Wolves still receive federal protections in many states, including Arizona and Utah, so the coyote hunter in this case could face some kind of punishment for killing an endangered species. FWS officials said in a statement that an investigation into the killing is ongoing.

Two years ago, FWS officials announced they were hoping to remove wolves from the federal Endangered Species List entirely, with the exception of a small population Mexican gray wolves in the Southwest. Many conservation groups have strongly opposed the proposal.

"It is nothing short of a tragedy that this wolf's journey across the West was cut short because she was shot and killed by a coyote hunter," Eva Sargent, director of Southwest programs for the Defenders of Wildlife, said in a statement. "Sadly, with the U.S. Fish and Wildlife Service preparing to remove all protections for gray wolves, except for Mexican gray wolves, in the near future, it will become harder and harder for wolves to travel safely, and less and less likely that we will hear their howls echo through places like the Grand Canyon, which holds some of their ancestors' most favored habitat."