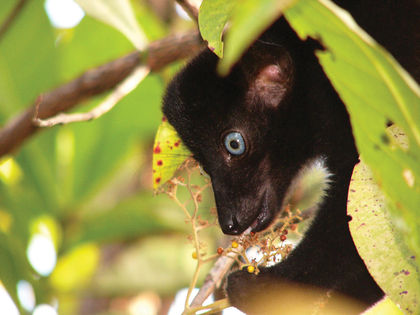 Lemurs have captured the public imagination in movies such as "Madagascar," but now these adorable primates are on the brink of extinction, conservationists say.

Nineteen lemur conservationists and researchers published a call-for-action to save Madagascar's 101 lemur species from the threats of deforestation and poaching stemming from the country's political woes.

"Since the 2009 political crisis, the situation on the ground has been grim for the Malagasy people, but also for the lemurs, especially in terms of habitat loss. If things don't turn around, lemur extinctions will start happening," Mitch Irwin, an anthropologist at Northern Illinois University said in a statement. Irwin was one of the authors of the article detailed in the Feb. 21 issue of the journal Science. [Wild Madagascar: Photos Reveal Island's Amazing Lemurs]

Lemurs, which are found only in Madagascar, are the most threatened mammal group on Earth. Up to 94 percent of lemur species are threatened, according to International Union for Conservation of Nature (IUCN) SSC Red List. The situation has only worsened for these puppy-eyed primates in the wake of the ousting of Madagascar's president in 2009 during a military-backed coup.

Humans have been destroying the lemurs' habitat for thousands of years, but the political upheaval has brought things to a head, Irwin said. International donors withdrew funding from environmental programs, and conservation laws haven't been enforced.

The Malagasy people are some of the poorest in the world, living on less than $2 per day. Following the political crisis, the lemurs' habitat has been under siege from an illegal trade in precious hardwoods, forest burning to clear space for crops and a thriving bushmeat trade.

The researchers called for the adoption of an emergency conservation action plan described Aug. 1, 2013, on the IUCN's website. To prevent lemur extinction, the plan calls for community-based, protected-habitat management, promotion of ecotourism and a steady researcher presence in Madagascar.

Another co-author of the Science article, Ian Colquhoun, an anthropologist at the University of Western Ontario, in Canada, highlighted the economic potential of preserving the lemurs. "I think there is huge potential for Malagasy all over the island to take pride in their lemurs," Colquhoun said in a statement.