Rhino poaching down in South Africa but conservationists are still worried 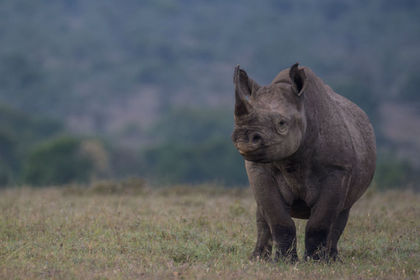 File image of a black rhinoceros. According to the conservation group Save The Rhino, there are just 29,000 rhinoceroses left in the world. Paul Goldstein/Exodus/REX/The Canadian Press

JOHANNESBURG – The number of rhinos poached in South Africa in 2015 was slightly lower than in the previous year, representing modest progress by law enforcement in countering poachers who have killed rhinos in record numbers, according to a conservation group.

Citing unidentified sources, Elise Daffue, founder of StopRhinoPoaching.com, said there were about 1,160 reported cases of rhino poaching last year, down from 1,215 in 2014. If the statistic is confirmed, it would be the first annual drop in numbers since rhino poaching surged around 2008 in South Africa, home to most of the world’s rhinos.

Other conservationists, however, believe the number of rhinos killed last year was higher. During a visit to South Africa in early December, Britain’s Prince Harry said poachers had killed 1,500 rhinos there in 2015. He did not cite a source.

The South African government plans to release its own 2015 statistics on rhino poaching early this year.

Conservationist Allison Thomson, who believes the number of rhinos poached in 2015 is higher than 1,160, wrote in an email to The Associated Press on Saturday that there was an increase in rhino orphans whose mothers were killed by poachers.

“The stats do not reflect the collateral damage of rhinos that died subsequent to being a victim of an attempted poaching and all the carcasses that lie in the bush yet to be found,” Thomson said.

Poachers have targeted rhinos to meet rising demand for their horns in parts of Asia, particularly Vietnam. Consumers believe rhino horn has medicinal benefits, but there is no scientific evidence to support the belief.