Patrols up in New Mexico after rare species of owl killed 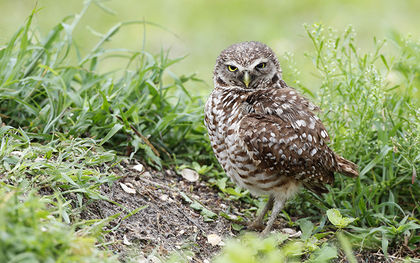 SANTA FE, N.M. – More officers have been put on patrol in the Caja del Rio area near Santa Fe after the reported killing of a burrowing owl, a federal land management official said.

Such a killing is rare, and the incident is being taken seriously, Bureau of Land Management spokeswoman Donna Hummel said. The species is among those protected under the Migratory Bird Treaty Act, the Santa Fe New Mexican reported.

“There are lots of eyes and ears and people that care about wildlife here in New Mexico,” Hummel said. “And (the shooter’s) illegal actions are not going to go unnoticed.”

Killing the protected owl could mean as much as six months in prison and a $500 fine, according to the U.S. Fish and Wildlife Service.

The owl’s death appears to have been caused by a gunshot, New Mexico Wildlife Center spokeswoman Dawn Wright said.

Bird watcher Julie Luetzelschwab photographed two burrowing owls on June 27, and three days later one of them was missing. The owl was found nearby. One leg was missing and the wings were spread as if it had been flying when it was struck. X-rays showed shrapnel in the bird’s left wing and shoulder blade.

Burrowing owls tend to stay close to the ground. They use tunnels left behind by prairie dogs for homes and to lay eggs.

Efforts to relocate prairie dogs and cover their tunnels because of health and nuisance concerns have limited burrowing owl habitat.

“It is just cruelty. There is no real reason or excuse to do that,” Hodoba said. “All species, in my opinion, have the right to exist, so we have to figure out how to do that as humans.”

The land management agency is monitoring the area where the bird was killed, Hummel said.

“Our job on public land is to protect them to the best of our ability,” she said. “And we do that with a lot of help from the community.”

Defenders of Wildlife estimates there are 10,000 pairs of burrowing owls nationwide.