Only 3 Wolves Are Left at Isle Royale National Park 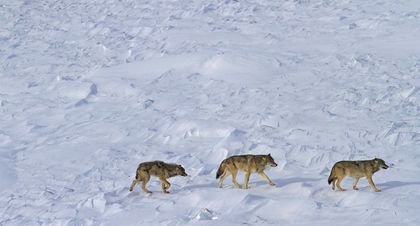 Sixty years ago, Michigan's Isle Royale was one of the only places you could find gray wolves in the contiguous United States.

Today, the wolf population at the remote national park is in trouble. Now there are just three individuals - a mated pair and their pup - left on the island in Lake Superior, according to a new report. Inbreeding is to blame, ecologists say, but climate change may be an indirect culprit in the decline.

It might be too late for the population to recover on its own, and wildlife managers are considering bringing more wolves to the island to keep the growing moose population in check and restore the health of the ecosystem. [Gallery: Photos of Brand-New Baby Wolves]

"Isle Royale is the last place on the planet where you have a forested ecosystem, a wolf population and moose population where none of them are exploited by humans," said John Vucetich, a wildlife ecologist at Michigan Technological University, who worked on the new report.

Because it is somewhat isolated from human influence, Isle Royale is an ideal place to study predator-prey dynamics. And since the late 1950s, scientists have been conducting yearly surveys to figure out how and why the populations of wolves (predators) and moose (prey) on this island shift over time.

Moose arrived on Isle Royale by 1900. Without any predators, the moose population was kept in check only by starvation, and the animals were stripping the island of its native plants and trees, such as balsam firs. Conservationists in the early 20th century, including Aldo Leopold, entertained the idea of introducing gray wolves on Isle Royale to take care of the moose problem, Vucetich said. But then wolves came to the island on their own via an ice bridge in the late 1940s. The wolf population increased to as many as 50 individuals over time, but has averaged at about 25.

The last time the wolf population dropped significantly was around the year 1980, when there was an outbreak of canine parvovirus, which was introduced to the island by pet dogs, Vucetich said. The population stayed low for another 10 or 15 years and then started to increase again in the 1990s. But in the last six years, biologists have witnessed another crash in wolf abundance.

In January 2014, nine wolves were counted in the survey. The three wolves counted in January 2015 mark a new low. Over the same one-year period, the moose population grew 19 percent, from 1,050 to 1,250, according to the report.

With such a small population, the wolves are susceptible to inbreeding, which can lead to serious health and reproductive problems. Bone deformities that occur at a rate of 1 in 100 in the general wolf population have been occurring recently at a rate of 1 in 3 in the wolves on Isle Royale, Vucetich said. And the small family of wolves left on the island doesn't seem to be faring so well. The two adults, which have been a mated pair for four years, had three pups two years ago, none of which survived beyond their second birthdays, Vucetich said. The pup that's currently with them appears to have a hunched posture and a deformed tail. [In Photos: The Fight Over Gray Wolves' Endangered Status]

A comeback is unlikely without new genetic material. But climate change might make it more difficult for roving wolves from the mainland to get to Isle Royale on their own, as warming temperatures in Lake Superior already make it less likely for an ice bridge to form in the winter, Vucetich said.

"If you think the purpose of a national park is to protect ecosystem health, you need to do something," Vucetich said. "The National Park Service has known about this problem for some time now, and they are delaying making a decision. That's disappointing."

But a wolf reintroduction program would likely take a few years to get off the ground. The National Park Service is currently weighing if and how they should intervene. Phyllis Green, superintendent of Isle Royale National Park, said an environmental impact analysis about how to manage wolves and moose on the island should be up for public comment in the next couple of months. But it's complicated because her agency has to manage for an entire ecosystem, not just wolves, in the face of a warming world.

"What are we going to do about climate change with species other than wolves?" Green said. "That's the larger question. That's why we have to decide where we put the park service's energy."

People focus on wolves because they're charismatic animals, Green said. But in her eyes, the true face of climate change on the island might be a type of cisco fish that was only found in the park's lakes and streams, but is now extinct.

"They're gone forever because their genetic strain is gone," Green said. "With wolves, we are fortunate because we have options to explore through this planning process. We have healthy wolf populations with healthy genes all around this island."