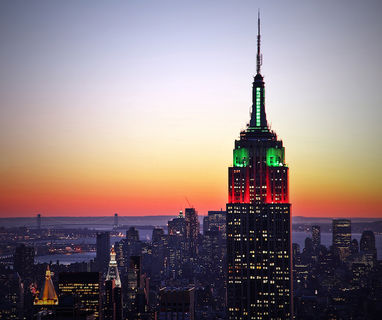 Getting people to pay attention to a huge, global problem is easier when you have an enormous billboard at your disposal.

On Saturday (Aug. 1), New York's Empire State Building will be converted into a giant billboard to draw attention to the plight of endangered animals around the world. Images of the animals will be flashed onto a 375-foot by 186-foot (114 by 57 m) portion of the iconic building, equivalent to 33 floors of the building's faÃ§ade.

From 9 p.m. to midnight EDT on Saturday, the Empire State Building's southern face will feature images of a snow leopard, a golden lion tamarin, a manta ray and many other creatures that could soon be wiped out in Earth's sixth mass extinction, according to Louie Psihoyos and Travis Threlkel, the organizers of the upcoming event. [10 Species You Can Kiss Goodbye]

Psihoyos, a photographer and Academy Award-winning filmmaker (he directed the 2009 Oscar-winning documentary "The Cove"), is co-founder of the animal rights and conservation organization Oceanic Preservation Society (OPS). Psihoyos teamed up with Threlkel, chief creative officer at Obscura Digital and a master of massive projection displays, to get images of the world's endangered species onto the side of the Empire State Building.

To accomplish this feat, the duo will be using 40 superpowerful projectors, aimed at the massive building from a nearby rooftop, The New York Times reported. New Yorkers are used to seeing the city's third-tallest building all lit up - the top of the skyscraper got its first light in 1932, and an array of colorful lights was added in 1976.

More recently, the real estate group that owns the building partnered with the Whitney Museum of American Art to reimagine the paintings of artists such as Andy Warhol and Elizabeth Murray as light displays, which added a burst of color to the New York skyline. However, Saturday's show will be the first to involve a looping reel of images, the Times reported.

Saturday's show couldn't have come at a more opportune time. Just this week, one of the last five northern white rhinos left on Earth died at a zoo in the Czech Republic. Also this week, the world watched in horror as information came to light about the slaughter (for "sport") of an African lion named Cecil that researchers had been tracking and studying for years.

Certain species of leopards, gorillas, rhinos, turtles, tigers and elephants are just a few of the animals listed as critically endangered by the World Wildlife Fund (WWF). Dozens of other animal populations are also dwindling, including many marine species, such as porpoises and whales. (A full list of endangered and threatened animals can be found on the WWF's website.)

The purpose of Saturday's larger-than-life photography exhibit is to educate as many people as possible about the plight of these species, according to Psihoyos and Threlkel, who told The New York Times that the event is a "weapon of mass instruction."

"We're going to try to create something beautiful, not bum people out," Threlkel told the Times.