North America Has Only 1 True Species of Wolf, DNA Shows 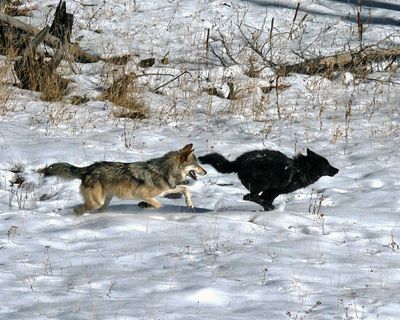 Gray wolves, which are not always gray, are protected under the Endangered Species Act.

DNA tests of wolves across North America suggest that there is just one species of the canid: the gray wolf.

What's more, populations of red wolves and eastern wolves, thought to be distinct species, are actually just hybrids of gray wolves and coyotes that likely emerged in the last couple hundred years, the study found.

The findings, published in the journal Science Advances on Wednesday (July 27), could have implications for the conservation of wolves considered endangered in the United States, the researchers say. [In Photos: The Fight Over Gray Wolves' Endangered Status]

For the study, scientists sequenced the whole genomes of 28 canids, including gray wolves, eastern wolves, red wolves and coyotes in North America.

The study revealed that gray wolves and coyotes are not very different from each other, genetically speaking. According to the DNA results, the two species likely diverged from a common ancestor in Eurasia about 50,000 years ago -much more recently than previous estimates of 1 million years ago.

Meanwhile, red wolves, thought to be native to the southeastern United States, and eastern wolves from the Great Lakes region, were found to be genetic hybrids.

"These gray-wolf-coyote hybrids look distinct and were mistaken as a distinct species," study author Robert Wayne, a professor of ecology and evolutionary biology at the University of California, Los Angeles, said in a statement.

Compared with eastern wolves, red wolves were more coyote-like in their genetic makeup, the study found, which makes sense historically. Before the hybridization, humans dramatically altered the habitat of wolves in the southeastern U.S. Once gray wolves started to get hunted out of the region, the hybrid red wolves could mate only with other hybrids and coyotes, the researchers said.

"If you did this same experiment with humans -human genomes from Eurasia -you would find that 1 to 4 percent of the human genome has what looks like strange genomic elements from another species: Neanderthals," Wayne explained.

The researchers thought they would see a bigger chunk of such "strange genomic elements" in red wolves and eastern wolves, perhaps at least 10 to 20 percent of the genome that could not be explained by the animals' relation to gray wolves and coyotes."However, we found just 3 to 4 percent, on average -similar to that found in individuals from the same species when compared to our small reference set," Wayne said.

Wolves were nearly exterminated from the contiguous United States by the mid-20th century. After gray wolves and red wolves were given protections under the Endangered Species Act in the 1970s, conservation efforts led to a modest comeback in the animals' populations. Red wolves have been reintroduced in North Carolina, and gray wolves have been restored in several areas of the western United States, notably in Yellowstone National Park. But the predators' endangered species listing is still sometimes a controversial, even politically charged issue, opposed by ranchers and farmers who see wolves as a threat to their livestock.

A few years ago, the U.S. Fish and Wildlife Service (FWS) put forth a controversial proposal to remove gray wolves from the endangered species list. Technical distinctions about wolf species were at the heart of the plan. The FWS argued that gray wolves had been restored in enough of their original habitat. The agency relied on a 2012 study to designate a new species, the eastern wolf, as a separate species from the gray wolf; if that were true, it would mean gray wolves had never lived in the eastern United States, and thus the FWS claimed it wasn't responsible for restoring gray wolves in that area.

"The recently defined eastern wolf is just a gray wolf and coyote mix, with about 75 percent of its genome assigned to the gray wolf," Wayne said in the statement. "We found no evidence for an eastern wolf that has a separate evolutionary legacy. The gray wolf should keep its endangered species status and be preserved, because the reason for removing it is incorrect. The gray wolf did live in the Great Lakes area and in the 29 eastern states."

The new results may also call into question whether the red wolf can be listed as an endangered species if further research proves this population is not even a true species.

But Wayne and his co-authors argued that it is "antiquated" to require full species status for an organism to get an endangered listing. The researchers recommend that policy makers take a more flexible approach to applications of the Endangered Species Act so that they can also protect hybrids that fill important ecological niches (i.e., keeping deer populations in check).