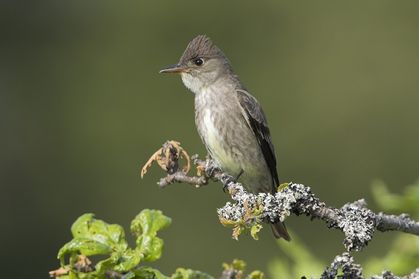 The olive-sided flycatcher has been designated as a threatened species in Manitoba. Glenn Bartley/Getty Images

WINNIPEG – Manitoba’s NDP government is moving to protect five animal and plant species and two ecosystems in the province by designating them as threatened or endangered.

The little brown bat, the northern long-eared bat and a rare fern called Gastony’s cliffbrake have been designated as endangered, while the olive-sided flycatcher is threatened under regulatory amendments to the Endangered Species and Ecosystems Act. The Canada warbler’s situation has improved to threatened from endangered.

The two ecosystems being designated are tall grass prairie — which hosts a vast array of grasses, flowers and wildlife — and alvar, a plant community of thin soil over limestone in the Interlake region where a variety of birds, reptiles, mammals and insects live.

The government says Manitoba will be the first province in Canada to designate ecosystems as endangered.

“By protecting ecosystems, we protect the habitat for lots of rare and threatened species that occur in those places.,” said University of Winnipeg bat researcher Craig Willis.