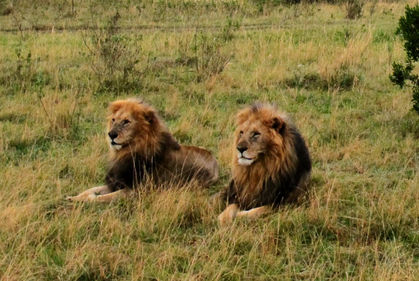 African lions will now be protected under the Endangered Species Act, announced today by U.S. Fish and Wildlife Service officials.

"Subspecies" defines groups within species that are genetically distinct but still capable of interbreeding. A 2014 proposal had prompted the FSW to grant the western and central African lions "threatened" status. But according to today's FSW announcement, scientific information indicated that lions in those areas were actually more closely related to Asiatic lions and that they should be identified as such - P. leo leo. [In Photos: A Lion's Life]

And because P. leo leo populations are significantly smaller than P. leo melanochaita, the agency determined that "endangered" status was more appropriate for the group. Only 1,400 P. leo leo individuals remain in the wild - about 900 in 14 African groups and around 500 in India.

P. leo melanochaita's numbers are more reassuring, with an estimated 17,000 to 19,000 animals living across southern and eastern Africa, mostly in protected areas. That may seem like a lot, but estimates of lion populations in the mid-20th century placed them at around 200,000 individuals, FWS Director Dan Ashe said today at a news briefing. Ashe went on to add that the expansion of human populations and activities will only continue to threaten the lions and their habitats.

Established in 1973, the Endangered Species Act (ESA) was signed into law to conserve species and their habitats by identifying which species are most vulnerable to extinction and enforcing policies to protect them. The U.S. agencies administering the ESA are the U.S. Fish and Wildlife Service, which is primarily responsible for plants and animals on land and in freshwater bodies like rivers and lakes, and the National Ocean and Atmospheric Administration's National Marine Fisheries Service (NMFS), which oversees marine wildlife.

Under the ESA, species are listed as "endangered," which describes "any species which is in danger of extinction throughout all or a significant portion of its range," and "threatened," identifying "any species which is likely to become an endangered species within the foreseeable future." A 2013 list published by the FWS identified 2,054 species worldwide as endangered or threatened, of which 1,436 are native to the United States.

In a statement, the FWS cited decades of alarming and continuous decline in African lion populations as one of the chief reasons for the status change. Factors identified as the biggest threats to lions included habitat loss due to agriculture, killings to prevent or retaliate against lions' preying on livestock, and inadequate management of protected areas.

In July 2015, the death of the African lion "Cecil" at the hands of an American hunter sparked waves of outrage across social media channels, along with calls for stronger conservation measures to protect African lions. During today's news briefing, Ashe said that, while hunting is not responsible for the recent sharp decline of African lion populations, steps must be taken to ensure that revenue from hunting provides economic support for lion management and conservation efforts.

Beginning in 30 days, the U.S. import of any live lion specimen, products or hunting trophies will require a permit issued by the FWS, Ashe said. During the application process, the agency will determine whether the activity in question contributed to the enhancement of the species in the wild. Tying economic gain to lion conservation, Ashe said, would also encourage local communities to engage in developing sustainable solutions for Africa's lions. Otherwise, "people will continue to see them as a threat," he said, "and not a benefit."