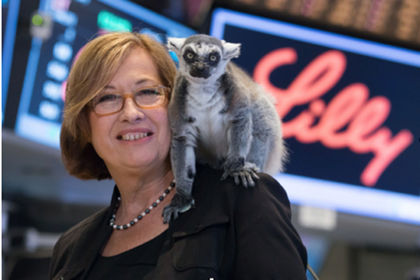 This ScienceLives article was provided to Live Science in partnership with the National Science Foundation.

A serendipitous encounter between Patricia Wright, then a social worker, and an owl monkey in a New York City pet store in 1968 ultimately inspired Wright to reinvent herself — eventually becoming an award-winning Ph.D. scientist and conservationist devoted to saving lemurs. Lemurs are a primate found naturally only in Madagascar — the world’s fourth largest island, located about 250 miles off the coast of southern Africa.

One of the World’s Most Endangered Primates

In 2012, the International Union for the Conservation of Nature described 91 percent of the 103 known species and subspecies of lemurs as threatened with extinction; this is one of the highest levels of threat ever recorded for a group of mammals.

Because of Madagascar’s island isolation, most of its plant and animal species are found nowhere else in the world. Nevertheless, 79 percent of Madagascar’s original rain forest habitat has already been cleared by humans.

A professor at Stony Brook University, Wright’s approaches to saving Madagascar’s lemurs  and their forest habitat involves combining science and conservation. “You can’t save what you don’t understand,” she says.

Wright’s many scientific and conservation achievements include working with the Madagascar government to create Ranomafana National Park in Madagascar in 1991. The Park protects 43,500 hectares of forest, including rain forests, and 12 lemur species. In addition, Wright is the founder of the Centre ValBio Research Station located on the edge of the Park. Centre ValBio, which is partially funded by the National Science Foundation, is a pivotal hub for researching rainforest biodiversity  and conservation and for conducting outreach to the community and policy makers. [Thanks, Dad. Owl Monkeys Are Caring Fathers, Too]

Wright partners with Malagasy villagers to develop conservation strategies that are scientifically sound and give villagers a stake in the sustainability of Madagascar’s rainforests. With more than 75 percent of Madagascar’s population surviving on or below $1.25 per day, these solutions include promoting ecotourism.

Throughout her career, Wright has received many awards, including the MacArthur “Genius Award” in 1989. On May 12, 2014, Wright was named the 2014 winner of the Indianapolis Prize, the world’s leading award for animal conservation. Three days later, Wright—accompanied by several lemurs—rang the New York Stock Exchange’s Closing Bell.

Along with gaggles of jumping and leaping lemurs—Wright is featured in the new IMAX film, Island of Lemurs: Madagascar, which is currently playing throughout the U.S. Also, Wright recently described her early research on owl monkeys and adventures in South American rain forests in High Moon Over the Amazon: My Quest to Understand the Monkeys of the Night (Lantern Books: 2013).

Editor's Note: The researchers depicted in ScienceLives articles have been supported by the National Science Foundation, the federal agency charged with funding basic research and education across all fields of science and engineering. Any opinions, findings, and conclusions or recommendations expressed in this material are those of the author and do not necessarily reflect the views of the National Science Foundation. See the ScienceLives archive.