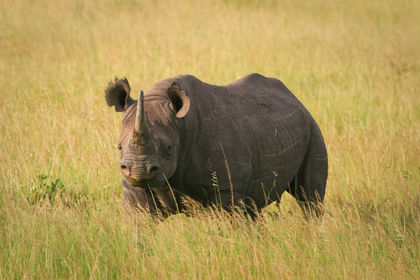 A black rhino standing in the grass in Masai Mara, Kenya.

Marc Bekoff, emeritus professor at the University of Colorado, Boulder, is one of the world's pioneering cognitive ethologists, a Guggenheim Fellow, and co-founder with Jane Goodall of Ethologists for the Ethical Treatment of Animals. Bekoff's latest book is Why Dogs Hump and Bees Get Depressed (New World Library, 2013). This essay is adapted from one that appeared in Bekoff's column Animal Emotions in Psychology Today. He contributed this article to LiveScience's Expert Voices: Op-Ed &amp; Insights.

We live in a troubled and wounded world in which humans continue to dominate and relentlessly kill numerous nonhuman animals (animals). Should we kill in the name of conservation? Individual animals are not disposable commodities.

A Texas hunting club recently auctioned off an endangered black rhino, purportedly to save other black rhinos and their homes in Namibia. The Dallas Safari Club says "Namibian wildlife officials will accompany the auction winner through Mangetti National Park where the hunt will occur, 'to ensure the correct type of animal is taken.'" This is not a very comforting thought. This sale, in which an animal is objectified and treated like a disposable commodity, raises many questions about how humans try to save other species. [Hunt Club Auctions Opportunity to Kill Endangered Rhino (Op-Ed)]

The world is in dire need of healing because we are well on the way to eliminating an unprecedented number of species and a wide variety of habitats. We are testing the limits of resiliency of natural ecosystems and we must revise some of the ways in which we attempt to coexist with other animals and the land they need to survive and to thrive. Some of these methods center on heinous ways of killing them "in the name of conservation" or "to foster coexistence." These methods, that depend on killing animals, are not part of the healing process because they further increase the distance between "them" (other animals) and us and this results in our thinking of other animals as less valuable and more disposable.

Compassionate conservation can help us along because it stresses that the life of every individual matters and trading off an individual for the good of their own or another species is not an acceptable way to save species. And, there doesn't seem to be much evidence that a tradeoff of one life for another works in any significant way.

Black rhinos do indeed find themselves trying to avoid humans out to kill them, but in Namibia only 10 rhinos have been killed since 2006. The argument that a "problem" rhino (an old male who no longer breeds and causes trouble for other rhinos) will be the target of this pricey hunt is a weak one — and instead of killing him, placing him in a sanctuary so that people can learn more about rhinos, would be a better alternative. This lesson in humane education won't be as lucrative, but it sets a far better example for how we deal with endangered species in the future. Of course, the 10 rhinos killed in Namibia in the past 7 years are 10 too many, but far fewer than have been killed in neighboring South Africa, where around 1,000 were killed in 2012 alone.

Where do you draw the line?

"To destroy nature is not to conserve nature. To mount the head of a wild animal in your trophy room is not conservation, it is repugnant." That above quotation comes from an essay in examiner.com by Ginnie Maurer called "Must conservation of wildlife including killing wildlife." It was based on a 60 Minutes report titled "Hunting animals to save them?" While it dealt with wildlife ranches in Texas where people can pay a small fortune to kill various animals in canned hunts, it does raise important questions about killing in the name of conservation.

Maurer had several valuable insights worth deep consideration. For example, she says, "If we want to conserve a population of, for instance, people native to a particular section of our country, would we kill a few to conserve the others? Isn't that saying the group is more important than the individual? Isn't it saying the individual gives up his or her rights to life because he or she belongs to a particular group, a particular species? . . . Each life — human animal and nonhuman animal — is an individual with an individual personality. Take a group of purebred puppies, for example — they may all look the same but theyaren't. They are their own individual beings with individual traits and personalities. Wildlife are individuals with their own individual traits and personalities. To say one is more deserving to live than another, in the name of conservation, bastardizes the word."

Thou shall not kill

Killing animals to save others sets a bad example and a regrettable precedent — the kill kill kill mentality is not the way to foster peaceful coexistence. When people say they kill animals because they love them, this makes me feel very uneasy. I'm glad they don't love me.

Cruelty can't stand the spotlight, and it is important that news about the sorts of activities discussed above be widely disseminated and openly discussed. That major media is covering them is a step in the right direction.

Bekoff's most recent Op-Ed was "In Elephant Society, Matriarchs Lead" This article was adapted from "Black Rhino Auctioned for $350K in the Name of Conservation" in Psychology Today. The views expressed are those of the author and do not necessarily reflect the views of the publisher. This version of the article was originally published on LiveScience.