How Big Cats and Wild Dogs Coexist in India's Mountains 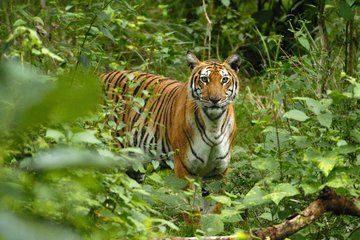 Their domesticated relatives may clash, but India's big cats and wilds dogs get along surprisingly well.

Leopards, tigers and dholes (Asian wild dogs) all compete for the same resources in India's Western Ghat region, yet a new study using camera traps shows that the three carnivores coexist with little conflict. Their solution? The predators have seemingly adapted to life in the relatively small reserves of the Western Ghats region by hunting at different times or in different areas, the researchers said.

While the success of these tactics is reliant on the density of prey and overall health of the habitat, lead author Ullas Karanth, the director for Science in Asia at the Wildlife Conservation Society (WCS), said conservationists can learn from the predators' adaptive strategies. [20 Weird Dog and Cat Behaviors Explained by Science]

"Tigers, leopards and dholes are doing a delicate dance in these protected areas, and all are manging to survive," Karanth said in a statement. "We were surprised to see how each species has remarkably different adaptations to prey on different prey sizes, use different habitat types and be active at different times."

The researchers tracked the three predators using dozens of noninvasive camera traps, which recorded about 2,500 images of the animals in action. Through analyzing these images, the study authors found that reserves teeming with more prey saw very little overlap in hunting times. The dholes, which hunt during the day, had hardly any contact with nocturnal-hunting tigers and leopards.

However, when prey was scarcer the three species' hunting activity did overlap. Even then, the images showed that the dholes avoided the big cats. Similarly, in an area abundant with both predator and prey, the leopards actively avoided tigers.

The study offers new insights on the behavioral adaptability of the three species, according to the researchers, and can help researchers understand how competing predators can coexist as their habitats continue to shrink.

"Such findings not only advance general scientific understanding of animal community ecology in general, but also provide basic knowledge that must necessarily underpin any effective endangered species recovery program," the study authors wrote online on Feb. 8 in the journal Proceedings of the Royal Society of London B: Biological Sciences.