Half of Adélie Penguins Could Be Wiped Out by Global Warming 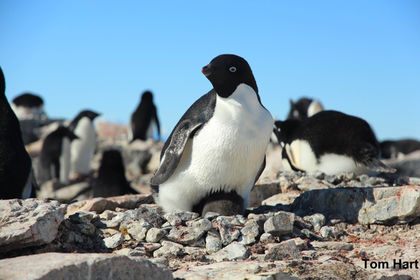 An Adélie penguin incubating its chicks at Petermann Island on the Antarctic Peninsula.

Global warming may cause massive drops in the population of AdÃ©lie penguins in Antarctica, new climate data suggests.

The tuxedo-clad birds breed on rocky, ice-free ground, and as glaciers receded over millions of years, AdÃ©lie penguins have reclaimed once icebound land for breeding. But the climate may have reached a tipping point, and future warming will likely fuel declines in AdÃ©lie colonies, the researchers found.

"It is only in recent decades that we know AdÃ©lie penguins population declines are associated with warming, which suggests that many regions of Antarctica have warmed too much and that further warming is no longer positive for the species," study co-author Megan Cimino, a researcher in the college of earth, ocean and the environment at the University of Delaware, said in a statement. [In Photos: AdÃ©lie Penguins of East Antarctica]

Unlike emperor penguins, which breed on ice, AdÃ©lie penguins live all along the Antarctic peninsula, and breed on rocky patches of ground in the Antarctic summer of October through February. To feed their young (and themselves), they hunt for fish and krill in nearby oceans.

Past work had found declines in the population of these penguins in some regions of Antarctica, particularly West Antarctica. To see how climate would impact future bird populations, Cimino and her colleagues analyzed both head counts from actual colonies, as well as temperature data and satellite imagery of ice-bound and ice-free regions of Antarctica (high resolution satellite imagery can also provide estimates of penguin colony size). The team also focused on unusual climate patterns during chick-rearing seasons between 1981 and 2010. They then combined this data with climate models that predict future sea ice and sea surface temperature to predict future population ranges.

The picture looks grim for some of the chubby birds: By 2060, about 30 percent of the colonies may have lower populations, while 60 percent of colonies will be in decline by the turn of this century, the researchers reported June 29 in the journal Scientific Reports.  Overall, about half of the penguins could vanish by 2099.

The hardest hit colonies may be in the West Antarctic Peninsula and surrounding islands, which have already faced declining penguin populations, the researchers found.  Those areas are predicted to have the greatest climate impact due to warm sea surface temperatures, which models suggest could reduce the suitable area for rearing chicks, the researchers said.

But some regions may be partially insulated from the climate impacts, and bird colonies may stick to those regions, preventing species-wide declines.

"The Cape Adare region of the Ross Sea is home to the earliest known penguin occupation and has the largest known AdÃ©lie penguin rookery in the world. Though the climate there is expected to warm a bit, it looks like it could be a refugia in the future, and if you look back over geologic time it was likely a refuge in the past," Cimino said.