Goodbye, Nola: Only 3 Northern White Rhinos Remain in the World 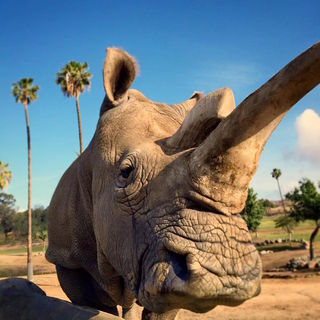 Nola, one of the last northern white rhinos on Earth, died this week.

One of the four northern white rhinoceros left on Earth died yesterday (Nov. 22), leaving only three surviving members of the critically endangered species.

Nola, a 41-year-old female rhino, lived at the San Diego Zoo Safari Park since 1989. In recent weeks, Nola suffered from a bacterial infection, and on Nov. 13, the aging animal underwent surgery to drain a large abscess in her pelvic region, which veterinarians finally identified as the source of her sickness. Though the procedure was successful in reducing the infection, Nola's condition grew worse, leaving her without an appetite and unable to move around, according to zoo officials.

When intensified treatment efforts were unsuccessful, the animal's caretakers chose to euthanize her yesterday, in what was a "difficult decision," according to a statement released by the San Diego Zoo. [In Photos: The Last Surviving Northern White Rhinos]

Nola follows in the footsteps of NabirÃ©, a 31-year-old female northern white rhino that died of a ruptured cyst in July at the DvÅ¯r KrÃ¡lovÃ© Zoo in the Czech Republic. The deaths of these two critically endangered animals mean that just three northern white rhinos remain in the world.

Habitat loss and poaching have kept the northern white rhinoceros (Ceratotherium simum cottoni) on the brink of extinction for years. The three remaining members of the species reside in captivity at Ol Pejeta Conservancy in Kenya, where they were transferred after living at a zoo in the Czech Republic. The four remaining northern white rhinos that roamed the wild of the Democratic Republic of Congo as recently as 2007 are now presumed dead, which means there are no known members of the species still living in the wild, according to the Ol Pejeta Conservancy.

Of the three endangered rhinos that remain, two are female and one is male. But at 42 years old, the last northern white rhino male, named Sudan, is too old to mount a female, and his sperm quality is poor, researchers from the San Diego Zoo Institute for Conservation Research told Live Science in June. The remaining female members of the species, Najin and Fatu, are also unable to reproduce. Najin's age and health problems prevent her from mating, according to Ol Pejeta CEO Richard Vigne. And Fatu, who has never bred, has uterine problems that may prevent her from ever becoming pregnant.