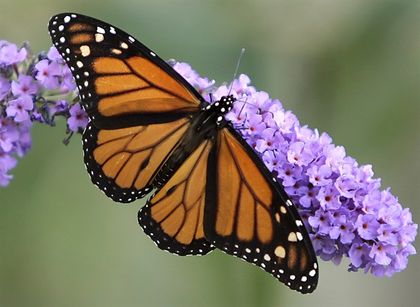 The eastern monarch butterfly could face extinction within the next 20 years, researchers of a new study say. THE CANADIAN PRESS/AP/Nati Harnik

A new study has concluded that unless numbers increase, the iconic monarch butterfly could face extinction within the next two decades.

The study, by the U.S. Geological Survey in partnership with the Scripps Institute of Oceanography, found that the population of the eastern migratory monarch butterfly has fallen dramatically. Between the winter of 1996–1997 and the winter of 2014–2015 numbers dropped by 84 per cent.

The decline could lead to a quasi-extinction where so few individuals remain that recovery of a species is impossible, and extinction is inevitable.

Migratory monarchs travel from Mexico to the United States and Canada each year, flying 3,000 to more than 4,500 kilometres. However, their numbers have been dwindling as they face several threats. The most pressing is the lack of milkweed, on which they feed, as well as lay their eggs.

It’s estimated that the monarch population was thriving at one billion in the 1990s. Now a mere 35 million are believed to remain.

The researchers of the new study stress that, while one year with an increase is certainly good news, it doesn’t speak to the average number of monarchs over the long-term that could reduce the risk of quasi-extinction.

“Because monarch numbers vary dramatically from year to year depending on weather and other factors, increasing the average population size is the single-most important way to provide these iconic butterflies with a much-needed buffer against extinction,” said Brice Semmens, the lead author of the study and a scientist at Scripps.

But not all researchers agree: a 2014 study published in the Journal of Animal Ecology estimated a quasi-extinction rate of about five per cent within a century.

Though monarchs have not been declared endangered, the U.S. Fish and Wildlife Department is undergoing a study to determine whether it should.