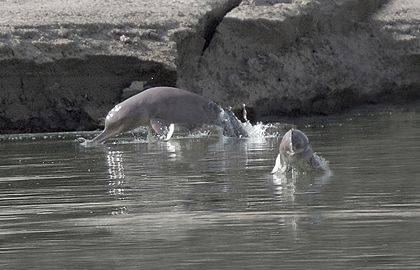 The Indus River dolphin's habitat is shrinking because of irrigation dams that divide up the river into sections, new research suggests.

The findings support conservationists' long-held suspicion that dams along the world's major rivers have been catastrophic for the species that live there.

"It is river habitat fragmentation by dams, and removal of river water for irrigation, that has caused the massive range decline of the Indus River freshwater dolphin," Gill Braulik, a cetacean specialist at the Wildlife Conservation Society in Tanzania and lead author of the new study, said in a statement. "This increased understanding of species decline in fragmented river systems is especially important because hundreds of new dams and water developments are planned, or are under construction, in many of the world's rivers, and large losses of aquatic biodiversity can be expected." [In Photos: The World's Most Endangered Wildlife]

River dolphins evolved from ancestors that swam the seas but adapted to their inland homes after being edged out of the oceans by other marine dolphins. Around the world, there are several species of river dolphins, which evolved similar features independently, according to a 2012 paper in the journal Proceedings of the National Academy of Sciences. River dolphins have longer snouts than those of their ocean-dwelling counterparts, but they can't see as well as marine dolphins, probably because good eyesight wasn't needed in the dim, cloudy river water where they live, according to the World Wild Fund for Nature.

Unlike their marine counterparts, many river-dwelling cetaceans are listed as endangered or critically endangered, according to the International Union for Conservation of Nature. For instance, the Yangtze River dolphin hasn't been seen for years and has likely been extinct since the mid-2000s, the researchers wrote in the paper.

The Indus River dolphin, Platanista gangetica minor, lives in the Indus River, which originates high in the Tibetan Plateau, winds through Pakistan and empties into the Arabian Sea. Due to high demand for hydroelectric power and irrigation, dams now dot the river and break up the river dolphin's native habitat.

To quantify this habitat fragmentation and assess whether it had harmed the dolphins, Braulik and her colleagues, in partnership with World Wide Fund for Nature - Pakistan and the University of St. Andrews in Scotland, studied reports of river-dolphin distribution from the 1870s — just before the first major dam was built — up to the present. They tracked the times when dolphins were last seen in certain river regions, and compared those times to when dams were built, along with water-flow levels during the dry season.

They found that the dolphins' habitat, which was once one large stretch along the Indus River, had been broken up into 17 segments over the years. The dolphins still live in six of those segments, but have disappeared from 10 others, with their status in one segment remaining unknown, the researchers found.

In addition, low water flow during the dry season — a result of damming the river and shunting its flow to irrigate crops — was probably what caused the river dolphins to disappear from much of their range, the researchers said. The dolphins also seemed to do best in the core area of the river, possibly because more dams dot the edges of their range.

The findings provide more comprehensive evidence of what conservationists have long suspected, said Randall Reeves, a cetacean researcher at the International Union for Conservation of Nature who was not involved in the study.

"One could think of the Indus as a 'poster child' showing the destructiveness of water development, especially in an arid environment like Pakistan's," Reeves wrote in an email to Live Science.

Although dolphins have managed to persist, the biodiversity that existed before massive water projects is just a distant memory, he added.

There's no telling whether the new study will impact policy, "but at least the documentation is now available," Reeves said.

The findings were published today (July 16) in the journal PLOS ONE.

Editor's Note: This story was updated to add information about the organizations that helped conduct the study.