Critically Endangered Porpoise Could Be Extinct in Four Years 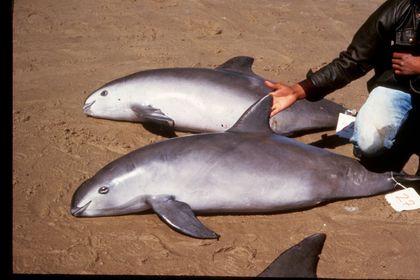 The rarest and most endangered marine mammal in the world could go extinct in four years without stepped-up enforcement measures, new research suggests.

Vaquitas, rare porpoises that live off the coast of Mexico, have been dying in droves, because the animals get caught in fishing nets. Now, a new study shows that governments are doing little to protect the animals against illegal fishing nets.

The vaquita, or Phocoena sinus, lives in the Gulf of California, off the coast of Mexico. The animals have winsome faces with a distinctive look. [See Images of the Elusive Vaquita Porpoise]

"They look like they're wearing dark lipstick and mascara," said Rebecca Lent, executive director of the Marine Mammal Commission, an independent federal agency that aims to protect and conserve marine mammals.

The smallest type of porpoise, the vaquita measures just 4 to 5 feet (1.2 to 1.5 meters) in length and is typically hard to spot.

"These vaquita porpoises are very shy. They hardly ever appear," Lent told Live Science. "Most of the ones we have are ones that came up dead in fishing nets."

This cetacean is considered critically endangered, according to the International Union for Conservation of Nature. And conditions are only getting worse. A July 2014 report used the animals' acoustic calls to estimate that fewer than 100 of these elusive creatures still live in the wild. The cetaceans have a baby just once every other year, and the most recent report suggests the population has dropped 18.5 percent in the last year.

The main culprit for the vaquita's steep drop is the rise of illegal fishing, according to July report. Boats hunting for an endangered fish called the totoaba, prized in China for the supposed medicinal properties of its swim bladder, have taken to using gill nets, a kind of vertical net that traps fish by their gills.

"It's essentially a wall across the environment," said Peter Thomas, International and Policy Program director for the Marine Mammal Commission "It's not visible to the vaquita," Thomas told Live Science. As a result, the animals get entangled in these nets.

While most of the vaquita's range is not currently protected from gill net fishing, about a fifth of their habitat is a protected area where the practice is outlawed.

Now, new photos taken on Dec. 4 reveal that extensive gill net fishing is going on, even in that small region. About 90 fishing boats have been in the area since the start of the new fishing season, with at least 17 confirmed to have gill nets aboard, the study found.

The new images highlight the importance of stepping up enforcement against illegal fishing, Lent said. The entire vaquita range should be protected, and more ships should patrol the area, he said. And to ensure that this type of fishing truly stops, simply having a gill net aboard should be illegal, Lent said.

"We're really down to the wire now" to save the vaquita, Lent told Live Science. "We really only have a couple of years."