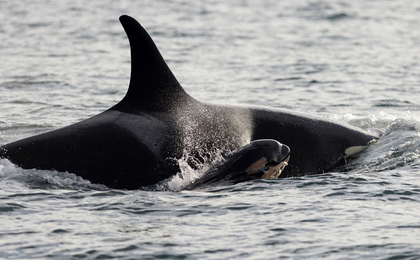 A photo of the newly born Orca, J53, the sixth new member of the Southern Resident Community this year Simon Pidcock/Ocean EcoVentures

The Center for Whale Research in Friday Harbor confirmed on its Facebook page this weekend that a newborn orca designated as J53 was seen travelling Saturday in Haro Strait with a 38-year-old orca known as Princess Angeline.

Michael Harris, the executive director of the Pacific Whale Watch Association, says the whale watch community is referring to the baby boom as the “class of 2015.”

There could be more babies on the way. Federal biologists recently used drones to take thousands of images of the orcas, and they said several appeared to be pregnant.