Can 'Good' Bacteria Save Bats From Killer Fungus? 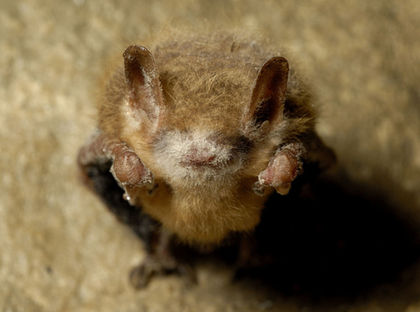 Since WNS arrived in North America, tens of millions of dollars and countless hours have been dedicated to trying to understand this disease, quantify the impact it’s having on bat populations and develop ways to curtail the devastation. Successfully combating the disease has been difficult, but our group has been exploring some new techniques that control the fungus using naturally occurring soil microbes.

P. destructans is a fungus with a long evolutionary lineage in soil. It can generate tremendous amounts of nearly indestructible spores called conidia. These spores, capable of living in conditions where actively growing fungus couldn’t, ensure that P. destructans can survive, and even potentially thrive, in host-free environments – including cave soils in the heat of the summer or previously decimated hibernacula, the sites where bats hibernate for the winter.

Every year P. destructans has extended its foothold in North America, killing millions of bats and eliminating the tremendous ecosystem services they provide. For instance, bats consume so many agricultural pest insects that healthy bat populations allow farmers to use less pesticide on crops.

Numbers for several hibernating bat species have now declined significantly enough to warrant consideration for protected status under the US Federal Endangered Species Act. The potential listings could have big financial consequences for North American industries including mineral extraction, forestry management and infrastructure development since they would need to avoid disturbing the listed species.

There’s an undercurrent of responsibility in the bat conservation community. Many now believe P. destructans was introduced into North America by human activities – in particular, recreational cavers from abroad using gear here that harbored European soil and spores.

This hypothesis is supported by the tremendous genetic diversity of P. destructans samples taken from WNS-positive hibernacula in Europe compared to the very low genetic diversity among samples from far-flung regions in the US. The fungus has existed in Europe long enough to develop distinct differences in the versions that live in regions such as Germany versus Spain. Versions isolated in New York, Missouri and Georgia are essentially identical, pointing to a single introduction of the fungus into the US.

Additionally, European bats manifest WNS symptoms, such as fungal growth on their muzzles and wings, but for currently unknown reasons they don’t die from WNS at the high rates their North American counterparts do.

For bat conservationists, this evidence underscores the role of people in facilitating, and now managing, this ecological disaster.

Developing and implementing control strategies for WNS presents unparalleled challenges in the field of microbial control. The very nature of bats and the hibernacula where they over-winter introduce seemingly insurmountable hurdles to traditional disease management strategies. Harsh conditions and challenging access, along with hibernating bats' sensitivity to disturbance, cause problems. And researchers must constantly consider the potential for collateral damage from control agents on native flora and fauna.

We’re looking to microbes and the naturally-occurring anti-fungal volatile organic compounds (VOCs) they produce as potential biological control agents of WNS. Here’s the idea: these bacteria and fungi co-evolved in their soil habitat, interacting and competing for resources and space. In this evolutionary jostling for supremacy, microorganisms develop traits that increase the fitness of one by exploiting a “weakness” in its competitor. Our goal is to harness these natural antagonisms – interactions in which one community member (bacteria) exerts a negative effect on another (fungus) but may not necessarily kill it – in the fight against WNS.

Researchers know soils exist that have disease-suppressive properties and are fungistatic – that is, they keep pathogenic fungi from growing and causing disease, but don’t kill them outright. We hypothesized that these soils could harbor numerous microbial antagonists of P. destructans. And in fact that’s just what we found. Bacterially-produced VOCs associated with fungistatic soils did act as antagonists against P. destructans. We also found that a soil-associated bacterium, Rhodococcus rhodochrous, can be induced to have tremendous contact-independent antagonism towards P. destructans in the lab – it doesn’t need to touch the fungus or the bats in order to prevent or reduce WNS.

Now we’re conducting field trials at hibernacula to explore a potential application method for these microbial controls. We’re also investigating the potential of this treatment in areas currently at different points in the disease cycle. One site in Missouri is in its first two years after WNS introduction, others in Kentucky have long-term declines.

WNS is here to stay. It’s a new part of the North American biosphere and a cave resident that bat species here must adapt to. No matter how powerful the tools we develop to combat this disease, they will never be enough. Ultimately it must be the goal of disease management efforts to curtail the tremendous population losses so that enough bats are able to reproduce to stabilize population numbers. We hope across many generations bats can develop the ability to exist, like their European counterparts, in a WNS world.