Bee species added to endangered list for first time in US 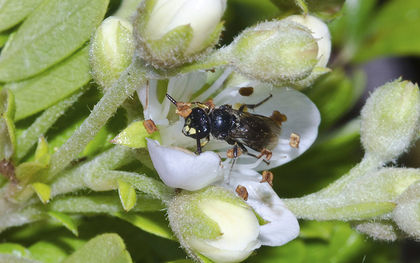 A yellow-faced bee is shown in Hawaii. Federal authorities added seven yellow-faced bee species, for protection under the Endangered Species Act on Friday, Sept. 30, 2016, a first for any bees in the United States. John Kaia via AP

Seven types of bees once found in abundance in Hawaii but now facing extinction on Friday became the first bees to be added to the federal list of endangered and threatened species, according to U.S. wildlife managers.

The listing decision, published on Friday in the Federal Register, classifies seven varieties of yellow-faced or masked bees as endangered, due to such factors as habitat loss, wildfires and the invasion of nonnative plants and insects.

The bees, so named for yellow-to-white facial markings, once crowded Hawaii and Maui but recent surveys found their populations have plunged in the same fashion as other types of wild bees – and some commercial ones – elsewhere in the United States, federal wildlife managers said.

Pollinators like bees are crucial for the production of fruits, nuts and vegetables and they represent billions of dollars in value each year to the nation’s agricultural economy, U.S. officials said.

Placing yellow-faced bees under federal safeguards comes just over a week since the U.S. Fish and Wildlife Service proposed adding the imperiled rusty patched bumble bee, a prized but vanishing pollinator once found in the upper Midwest and Northeastern United States, to the endangered and threatened species list.

One of several wild bee species seen declining over the past two decades, the rusty patched bumble bee is the first in the continental United States formally proposed for protections.