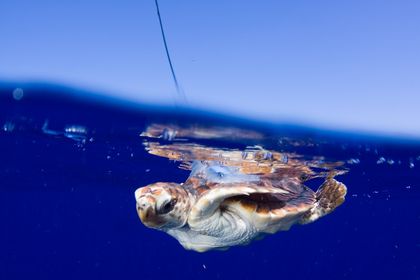 Baby sea turtles may not all follow the path scientists suspected the animals would travel. In fact, new satellite tracking shows that at least some turtles drop out and head for browner — and warmer — pastures.

Scientists have long suspected that young sea turtles ride a large current called the North Atlantic Subtropical Gyre all the way around the ocean, popping back out on their original coastline after a year or two of growth. The first long-term satellite surveillance of young turtles, however, finds that many of the animals drop out of this current, perhaps following brown, floating seaweed called Sargassum that provides them with warmth, shelter and food.

"We saw that a lot of the turtles had a similar movement pattern to what we expect Sargassum to do," said study researcher Kate Mansfield, a marine biologist at the University of Central Florida. [Images: Tagging Baby Sea Turtles]

The first few years of a sea turtle's life are known as "the lost years." The hatchlings break out of their shells on beaches along the East Coast, where they're easy to count. But then the turtle hatchlings toddle off into the sea and don't show up again near shore for several years. For loggerhead turtles, the most-studied species, hatchlings vanish when they're smaller than the palm of a hand. By the time the animals swim back near the coast, they've often reached about a foot and a half (45 centimeters) in length.

"They kind of disappear from our radar for a number of years," Mansfield told Live Science. Previous research has found the turtles are born with a magnetic sense of direction to guide their migration.

Marine biologists track seagoing creatures, including adult loggerheads, with satellite tags that transmit information such as location, depth and temperature. But hatchlings are too small to tag — affix a tag with heavy batteries to these turtles, and they'll sink, Mansfield said.

Advances in tag technology have started to change all that. New tags are smaller and solar-powered (no heavy batteries needed), Mansfield said. They're still too large to affix to a newborn loggerhead, but they fit on young turtles. Mansfield and her colleagues lab-reared 17 loggerhead turtles to the age of 3.5 to 9 months, waiting until the turtles had reached between 4 inches and 7 inches (11 to 18 cm) in length before tagging them and releasing them into the Atlantic Ocean.

The long-standing expectation was that baby turtles hatch off the East Coast of the United States, launch into the Gulf Stream that carries them north up the coast and then ride into the North Atlantic Subtropical Gyre. This system of currents takes the turtles past the Azores off the coast of Western Europe and down the coast of Africa, before the animals pop back out on the East Coast again. [The 10 Most Incredible Animal Journeys]

While the turtles do use the Gulf Stream and the Gyre, they don't always complete this ring around the Atlantic, the researchers report today (March 4) in the journal Proceedings of the Royal Society B. In fact, the turtles completed quite diverse journeys; they traveled clockwise, but on their own, individual paths. Some even dropped out of the Gyre into the still waters within that circular current, known as the Sargasso Sea. The Sea gets its name, in part, from the floating Sargassum that gathers there.

The solar satellite tags charged well, strongly suggesting the sea turtles spent lots of time at the water's surface, where the sun could reach them. Oddly, the tags sent back temperature data several degrees warmer than what researchers would have expected based on water temperatures recorded by satellite observation and ocean buoys. Further investigation revealed the turtles' brown shells, as well as brown Sargassum, kept the animals warmer than the clear water around them.

"It's like going outside on a warm day," Mansfield said. "If you wear a white shirt, you may be a little more cool than if you wear a black shirt."

The findings suggest that Sargassum provides a floating habitat for turtles, which not only keeps them hidden and fed, but also warm. As turtles are cold-blooded and get their heat from external sources, this extra warmth probably boosts their metabolism and growth, Mansfield said.

The dropout turtles may thus benefit from travelling shorter distances and staying with the seaweed, Mansfield said.

The findings are important for protecting the turtles, she added, as many species are endangered or threatened. Young turtles are vulnerable to fishing and other human activities as they make their fantastic voyage across the Atlantic, and the new study suggests damage to Sargassum habitats could hurt turtles, too, Mansfield said.

"In order to best protect any species, in general, you need to know some basic things about them, including where they go, when they go there, why they're there and how they're interacting with the environment," she said.