Adorable 'Panda' Porpoise Could Go Extinct As Soon As 2018 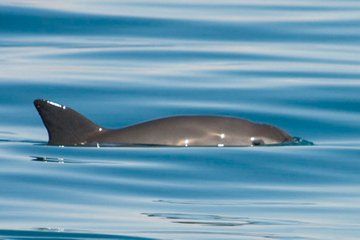 Mexico's vaquita porpoise is likely to go extinct without an immediate effort to save it, the World Wildlife Fund warned yesterday (May 18).

Vaquitas (Phocoena sinus) are small porpoises found only in the northern Gulf of California. They weigh up to 120 pounds (55 kilograms) and are distinguishable by the dark, panda-bear-like rings around their eyes. There are only about 30 of them left in the wild, making the species critically endangered. According to the WWF, these shy porpoises were only discovered in 1958. The main threat to their survival is illegal gillnet fishing, which vaquitas can get tangled in and drown.

"Unless we act decisively today, we could lose the vaquita forever," Jorge Rickards, the acting DEO of WWF Mexico, said in a statement.

The WWF released a report May 15 outlining the threats to the vaquita and strategies to save the species. In the report, the researchers say that "this species could go extinct before the next Mexican presidential election in 2018." Critical actions to avoid such an extinction include a permanent ban on gillnet fishing and strengthened enforcement against illegal fishing. [Vaquita Photos: The World's Most Endangered Marine Mammal]

Gillnets are long lengths of netting that snag fish by their gills. Use of gillnets began to grow in the Upper Gulf of California starting in the 1990s, according to the report, as fish stocks in the region began to decline and fishermen dependent on the Gulf for their livelihood became desperate. Now, as much as 85 percent of the Gulf's fisheries are either at the limit of yielding up fish without collapsing, or are already overfished, according to the WWF.

A major driver of the vaquita's decline, according to the wildlife advocacy group, is the poaching of the totoaba with gillnets. Totoaba are large fish with prominent swim bladders, which are prized in traditional Asian medicine. According to the San Diego Union Tribute, drug cartels have become involved in the business of paying fishermen to harvest the swim bladders and then smuggling them to China.

The report authors call on the Mexican government to stop this illegal fishing and the United States and Chinese governments to assist the effort by halting the totoaba bladder trade. (The smuggling chain travels through southern California.) The WWF also called on the World Heritage Committed and the Convention on International Trade in Endangered Species of Wild Fauna and Flora to take action.

A two-year ban on gillnet fishing by the Mexican government is set to expire at the end of this month. The WWF would like to see that ban expanded and made permanent; they'd also like the government to support their efforts to spread the use of alternative fishing gear. The group also supports making a plan to establish a conservation area in the Gulf for vaquitas where a breeding program could be established.

Despite the tiny number of vaquitas left in the wild, there is still hope to save the species, according to the report.

"As long as there is reproduction," the authors wrote, "there is potential for recovery."