Adorable American Pika Is Disappearing Due to Climate Change 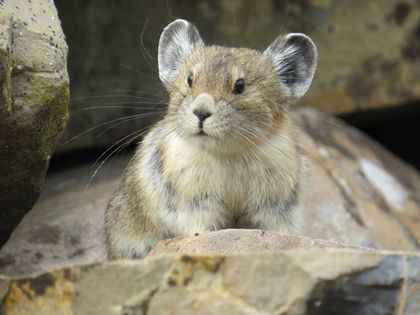 Whole populations of the American pika are disappearing due to climate change.

The American pika, a pint-size rabbit relative, is feeling the heat: Hotter summers induced by climate change are threatening these cute creatures' habitats throughout the western United States.

The small herbivores make their home in rocky slopes, known as taluses, across the West's mountain ranges. A new study by the U.S. Geological Survey (USGS) found that whole populations of the tiny mammal are disappearing due to climate change. The pika's mountainous habitats have become hotter and drier in the summer and harsher in the winter, with less snow cover to insulate their burrows in the ground, the researchers said.

After studying the cute critters from 2012 to 2015, the USGS found that the pikas' range was shrinking in southern Utah, northeastern California and the Great Basin, the latter of which covers most of Nevada as well as parts of Utah, Oregon, Idaho and California. [In Images: 100 Most Threatened Species]

"It is certainly clear that changes we have observed in pika distribution are primarily governed by climate, given that nearly all of our climate-related predictions have been borne out," study lead author Erik Beever, a research ecologist at the USGS, said in a statement.

According to the survey, American pikas have completely disappeared from Zion National Park in Utah, where there had been sightings of the animals as recently as 2011. In Cedar Breaks National Monument, also in Utah, pikas were found within only one-quarter of their historical range. And in northeastern California, the animals were found in just 11 of their 29 confirmed habitats.

The study found that while some short-term population changes were due to drought, other areas have not been home to pikas for decades.

"Combined with our previous work across the western U.S., the results illustrate that pika losses are not confined solely to the Great Basin, but that the rate of decline is quite variable across the western landscape," Beever said.

For years, wildlife advocacy groups have requested that the American pika be added to the list of endangered species. In 2010, the U.S. Fish and Wildlife Service (USFWS) rejected such a request, when the service's risk assessment found that "although the American pika could potentially be impacted by climate change ... the species as a whole will be able to survive despite higher temperatures in a majority of its range."

A new request to evaluate the American pika's status was made this April, and a preliminary decision is due in early September, the Associated Press reported. However, the USFWS only takes into account information submitted with the petition. Therefore, the new study will not be considered in the decision, USFWS spokeswoman Serena Baker told the AP.

According to the USGS, the pika is also seen as an "indicator species," meaning the animal can offer scientists an early warning about ecosystem changes.

The new study was published online Aug. 25 in the Journal of Mammalogy.