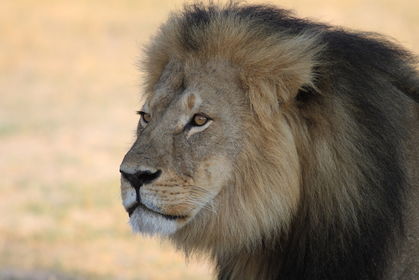 When an American big-game hunter shot and killed a famous lion named Cecil in Zimbabwe last month, he did more than kill an animal - he killed an important research subject.

Cecil, a 13-year-old male Southwest African lion, had been part of an ecological study in Zimbabwe's Hwange National Park since 2008. The initiative was developed by researchers at the University of Oxford in the United Kingdom, and is one of several conservation projects managed by the university's Wildlife Conservation Research Unit (WildCRU).

In recent weeks, the WildCRU researchers who had been studying Cecil from the time the big cat was 5 years old have given a number of interviews and posted a wealth of information on the WildCRU website to explain what they learned from Cecil before his death. Here are five ways Cecil and the other lions involved in the study have helped science. [In Photos: A Lion's Life]

The death of Cecil will likely result in the death of several more lionsbecause of what WildCRU researchers call the "perturbation effect." When the male leader of a pride is killed, other, nonrelated males typically vie for the newly available top spot. If the leader had brothers, the new coalition will kill them. If the leader left behind cubs, rival males will kill them as well, according to researchers.

WildCRU scientists plan to closely observe the ramifications of Cecil's death within the lion's former pride, according to a recent post on the group's website. David Macdonald, WildCRU's co-founder and director, called Cecil's death "heartbreaking" but said the organization's goal is to learn from this event in the coming weeks.

Lion brothers have complex, intimate relationships. When Cecil was first fitted with a GPS collar in 2008, he was traveling around Hwange National Parkwith his brother, searching for a pride of females that they might claim as their own. This behavior, known as "dispersing," is typical for young male lions and usually results in a big fight between the young males and the lions that are leading whatever pack the youngsters try to take over, Macdonald explained in his recent post.

Cecil and his brother took over their first pride in 2008, but they didn't hold it for long. In 2009, an aggressive neighboring pride challenged the brothers' rule, and Cecil's brother was killed in what Macdonald called a "border skirmish."

3. Turn the other cheek

The pride that had wrested power away from Cecil and his brother were known as the "Askari" coalition, and when Cecil's brother died, so did the leader of the Askari - another GPS-collared lion named Mpofu. But Mpofu left behind three sons who continued to rule the pride after their father's death.

One of Mpofu's sons, Jericho, was later ousted from the pride after trophy hunters killed both of his brothers. Things were looking pretty grim for Jericho until he met up with his former enemy, Cecil, who had also just been kicked out of the pride he had controlled for several years. Though the two got off to a rocky start, they later became inseparable, Macdonald said.

Unrelated male lions often form brotherly bonds because holding onto a pride, and the territory that comes with it, is just too much work for one lion, according to Macdonald, who said it also "makes sense" for unrelated males to team up in order to "gain access to a pride."

Lions tend to call a giant swath of wilderness home. In Hwange National Park, GPS-collared lions have been known to inhabit "home ranges" (the areas in which an animal lives and travels) covering more than 116 square miles (300 square kilometers), according to Andrew Loveridge, a longtime researcher with WildCRU's Hwange ecology project.

In a 2012 interview with the writers of Oxford's science blog (which was recently republished online), Loveridge said lions' wide "ranging" behavior and their ability to traverse many kinds of terrain are both surprising and intriguing. [Photos: The Wild Cats of Kruger National Park]

WildCRU researchers once observed a 10-year-old male lion (Loveridge didn't specify whether it was Cecil) move from Hwange National Park to a town in Zambia - a 137-mile (220 km) journey that took the lion about a month to complete. On its way, the lion crossed a river that was more than 300 feet (100 meters) wide, navigating through white-water rapids to get across. Understanding how lions move is essential to protecting these creatures from contentious encounters with humans, Loveridge said.

Lions are good at going with the flow, according to Loveridge, who said that the Hwange study has revealed one particularly "unusual" way that lions adapt their behavior to fit into a local ecosystem.

In Hwange National Park, rangers provide water for wildlife at artificially pumped waterholes during the dry season. These waterholes attract lots of prey species, as well as a few larger animals, like elephants, that lions don't typically go after, Loveridge said in the blog post.

The Hwange lions not only include these rare water sources in their ranges, but they also have adapted to hunt the elephants that are drawn to these places, the researchers said. The lions only go after elephant calves, but even those animals are rather large compared to the lions' typical prey. The predators' tendency to attack baby elephants is related to the dryness of the season; lions are more likely to go after elephants when there is a shortage of water and the elephants must travel long distances to find it, Loveridge said.