2013 Was Record Year for Rhino Poaching in South Africa 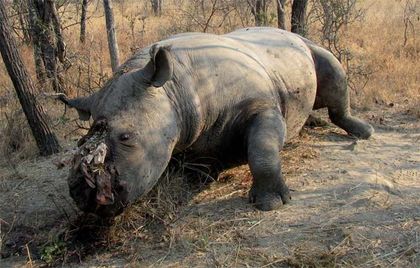 A black rhino carcass with the horn hacked off.

The number of rhinos illegally slaughtered in South Africa reached an all-time high in 2013, with an average of three rhinos killed each day, according to new figures released this month by the South African Department of Environmental Affairs.

Government officials revealed that a record 1,004 rhinos were killed last year, which is more than double the number slaughtered in 2011 and 1.5 times the number of rhinos killed for their horns in 2012. Kruger National Park, which is home to South Africa's largest population of black rhinos and white rhinos, was hardest hit, with poachers killing 606 rhinos within the famous safari destination last year.

Black rhinos are considered "critically endangered" by the International Union for Conservation of Nature (IUCN), and wildlife experts estimate that only 4,240 black rhinos remain in the wild. White rhinos are classified as "near-threatened," and there are an estimated 20,150 white rhinos in the wild, according to the IUCN. [Black Market Horns: Images from a Rhino Bust]

Rhino poaching on the rise

Over the past few years, rhino poaching has risen across Africa, and the illegal killings are being carried out by sophisticated, transnational criminal networks, according to TRAFFIC, an organization that tracks wildlife trade. The animals are slaughtered to satisfy a growing market for rhino horns, which has long been a coveted ingredient in traditional Asian medicine. While there is no medical basis, some believe the horns can cure cancer.

Criminal networks smuggle the rhino horns to consumer markets in Vietnam and China, according to TRAFFIC, but there is evidence of ties to other illicit activities, including the trafficking of people, drugs and weapons.

Mozambique, which borders South Africa, is regarded as a hub for the illegal smuggling activities, and likely functions as a haven for poachers who cross into South Africa to kill rhinos, TRAFFIC representatives said.

"South Africa and Mozambique must decisively up their game if they hope to stop this blatant robbery of southern Africa's natural heritage," Tom Milliken, TRAFFIC's rhino expert, said in a statement. "2014 must mark the turning point where the world collectively says 'enough is enough' and brings these criminal networks down."

In March 2013, the Convention on International Trade in Endangered Species of Wild Flora and Fauna urged certain countries heavily implicated in the rhino trade to take action against the growing crisis. By the end of this month, the Vietnamese government must report to CITES on its progress in addressing rhino-horn trafficking, including seizures, arrests, prosecutions and convictions related to the trade.

Last week, Singapore Customs seized eight pieces of black-rhino horn, worth more than $1.5 million, from a passenger attempting to travel through the country's Changi Airport, according to the World Wildlife Fund. The traveler accused of smuggling the rhino horn was in transit to his native Vietnam when customs agents seized the illegal cache, WWF representatives said.

As part of the CITES agreement, Mozambique must also show that it is taking steps to combat wildlife crime. In December 2012, South Africa and Vietnam signed a memorandum of understanding pledging to tackle wildlife trafficking. South Africa signed a similar agreement with China in 2013, and is in talks with other nations — including Mozambique, Thailand, Laos and Cambodia — according to TRAFFIC.

"The world's rhinos are facing a genuine crisis, and high-level agreements and statements have to translate into meaningful conservation action, both in rhino range states and in key consumer countries, such as Vietnam and China," Naomi Doak, coordinator of TRAFFIC's Greater Mekong Programme in Vietnam, said in a statement. "We are still waiting to see the rhetoric result in significant arrests and prosecutions of those orchestrating the rhino-horn trafficking."

Next month, heads of state and foreign ministers from about 50 countries will convene in London, England, to discuss issues surrounding the illegal trade of endangered animals. The summit will seek commitments from key governments to combat the growing global threat posed by the illegal wildlife trade.