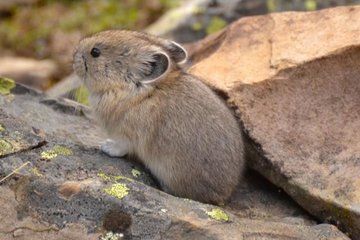 The chirps of the American pika have gone silent in a core portion of their habitat in California.

New research finds that the pika (Ochotona princeps) disappeared from a 64 square-mile (165 square kilometers) section of the Sierra Nevada mountains north of Lake Tahoe between the 1950s and the early 1990s. Pikas are tiny mammals, related to rabbits, that live on mountain slopes. They're known for making hay while the sun shines, harvesting grass all summer to dry and store for winter sustenance (they don't hibernate). They're also known for their distinctive, high-pitched alarm cries, which frequently greet hikers and backpackers picking their way along rock fields in pika habitat.

But pikas are struggling in the face of climate change, as highlighted by the new study, published online today (Aug. 30) in the journal PLOS ONE.

Pikas are adapted for cold weather — they even have fur on the bottoms of their feet, said study leader Joseph Stewart, a doctoral candidate at the University of California, Santa Cruz. They must climb to higher elevations when it gets warm to avoid overheating. They also rely on winter snows to blanket and insulate their dens, lest they freeze to death. Global warming has buffeted pikas from both sides by boosting summer temperatures and shrinking winter snowpack, Stewart told Live Science. [8 Ways Global Warming is Already Changing the World]

Stewart started doing pika surveys around northern Lake Tahoe in 2011 after conservation groups petitioned to list the small mammals as endangered under both California and federal law. He and his colleagues focused on 14 sites in a triangular-shaped area bounded by north Lake Tahoe, the Truckee River and Highway 267, a region they called the "Pluto triangle" because it encompasses the 8,617-foot-tall (2,626 meters) Mount Pluto. They visited the triangle sites multiple times between 2011 and 2016, searching for pikas, pika fecal pellets and hay piles and listening for pika calls. They also compiled survey information from 24 areas nearby but outside the triangle.

Initially, the researchers found old pika poop in the lower elevations of the Pluto triangle, so they figured living pikas must be farther upslope, having abandoned warmer lower habitats, Stewart said. They looked higher and higher: no pikas. The animals had vanished from this central portion of their range, the scientists found.

"A lot of studies have documented climate change sort of nibbling away at the edges of species distribution," Stewart said. "This is an example where you see a species disappearing from the center of an area of distribution."

Using radiocarbon dating, which measures isotopes of carbon to determine organic matter's age, the researchers were able to determine that the pika droppings from the Pluto triangle dated back from before 1955 all the way to 1991. In other words, while pikas vanished from some areas before 1955, the total disappearance of the species from this region was more recent.

"All signs point to climate change" as the cause, Stewart said.

Temperatures measured at the nearby Tahoe City weather station reveal an upward march of temperatures in the area, with an average increase of 3.4 degrees Fahrenheit (1.9 degrees Celsius) between 1910 and 2015, the researchers reported. Winter snowpack in the area has also declined, they found: Before 1955, there was not a single year on record with less than 0.8 inches (2 centimeters) of snowpack. After 1955, 34 percent of years had snowpacks lower than that level.

Pikas still persist in the Sierra Nevadas outside the Pluto triangle, but their future is precarious. Today, the animals have about 469 square miles (1,214 square km) of land with suitable climate in the greater Lake Tahoe area where mean summer temperatures stay below 57.5 degrees F (14.2 degrees C), the level above which pika survival becomes precarious, Stewart said. By modeling projected temperatures, Stewart and his colleagues found that suitable habitats in the right temperature range will decline 77 percent from its current area by 2030, and by 97 percent by 2050. That would leave a mere 13 square miles (33 square km) of land with suitable climate where pikas could survive year-round near Lake Tahoe. [101 Animal Shots You'll Go Wild Over]

The pika's story, though, is one of variability, said Johanna Varner, a biologist and pika expert at Colorado Mesa University, who was not involved in the study. In some regions, particularly in the more isolated mountains of southern Utah, climate change has hit pikas hard. In other areas, like the Columbia River Gorge in Oregon, pikas manage to live quite happily at practically sea level, thanks to short winters and cool under-rock refuges, Varner told Live Science. Some subpopulations seem to be able to adapt behaviorally, perhaps by reducing their foraging time during the hottest parts of the day.

"In some places, they seem to be doing OK," she said. But in others, the pikas don't have much resilience because less time spent foraging in the summer means starvation in the winter, she added: "There are some places that the outlook doesn't look very good, particularly in these really isolated low-elevation places where the pikas just don't have a lot of refuge to get away from warm summer temperatures."

The Pluto triangle is relatively low elevation, Varner said, so though it's a large area, it's also not entirely surprising that pikas living there might struggle with warming temperatures.

The disappearance of pikas in the middle of their Sierra Nevada range means that the animals are unable to meet and mate, Stewart said, which could give them fewer genetic tools to cope with climate change. Without connected habitats, more resilient pikas are unable to naturally spread whatever genes are responsible for their survival. Humans might be able to help by deliberately moving a few individuals from hardier populations to more vulnerable areas, in the hope that the resilient genes will spread, Stewart said. However, pikas are just one of an estimated 1 million species that are threatened by climate change, he said. Trying to save them, one by one, as the climate gets warmer and warmer is likely battling against the inevitable.

"A far more efficient solution to doing that is to rein in and reverse climate change," Stewart said.