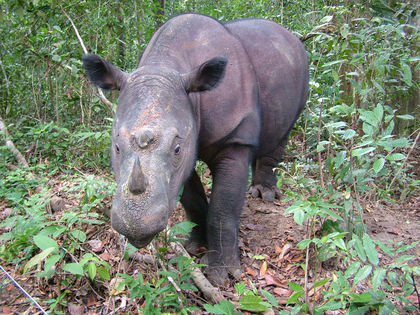 Fewer than 250 Sumatran rhinos (Dicerorhinus sumatrensis) are left in the wild.

Credit: Copyright Save the Rhino International

Humans are killing off species thousands of times faster than nature creates them, new research finds.

The modern rate of extinction across species is 1,000 times that of the background rate before humans began altering the globe and thousands of times faster than the creation of new species, according to a new study in the journal Conservation Biology. The findings echo and expand on previous research published in the journal Science, which also suggested that humans are on the verge of causing a sixth mass extinction on Earth.

"We now know for certain how much faster species are going extinct," said Stuart Pimm, a conservation ecologist at Duke University and president of the nonprofit conservation group Saving Species.

To put it in concrete terms, Pimm told Live Science, without human activities, the planet should lose a bird species only about once every 1,000 years. In actuality, at least 150 species of birds have gone extinct in the last 500 years alone, according to conservation partnership BirdLife International. [6 Extinct Animals That Could Be Brought Back to Life]

The new work, which is part of the same research initiative that was the basis of the paper published in Science in May, is the final piece in a five-year project to understand how many species there are, how many are unknown and how fast they're going extinct, Pimm said.

"Getting the rates of extinction now is pretty straightforward," he said. "You basically look at the obituary notices."

The past, however, is harder to illuminate. Fossils can trace the history of some diversifications and extinctions, but they preserve mostly marine animals rather than land animals, and do so in a spotty record. The total number of species is another clue, as it can reveal how quickly species diversify.

"You don't need very much information for that. The first bird was Archaeopteryx, and we now have 10,000 species of birds, so you can work out how fast new bird species are created," Pimm said. Archaeopteryx is considered a transition species between dinosaurs and birds.

Pimm, along with lead author Jurriaan de Vos of Brown University and their colleagues, turned to DNA data to fill in the gaps.

Using molecular phylogenies — family trees created by a comparison of DNA among species — the researchers tracked how species are born and die over time. This is the first time the three sources of information, from fossils to diversification to molecular phylogenies, have been tied together, Pimm said.

The results were sobering: Species are not "living fast and dying young," which is a blow to biodiversity, Pimm said. There is no bump in diversification to offset the rapid pace of extinction, he said.

"The idea is that near the present, just within the last 100,000 years, the last million years, there ought to be a blip in the number of species, because they haven't had a chance to go extinct yet," Pimm said. "The bottom line is, there is no blip."

Policymakers often question whether the current high rates of extinction are worth worrying about, Pimm said, given that species wink out of existence all the time.

"It's like death and taxes," Pimm said. "They may be inevitable, but you don't want them to be too high."

The new and clarified understanding of the scope of the problem will feed into strategies to reduce extinctions, Pimm said. "We want to get on with the business of saving biodiversity," he said.