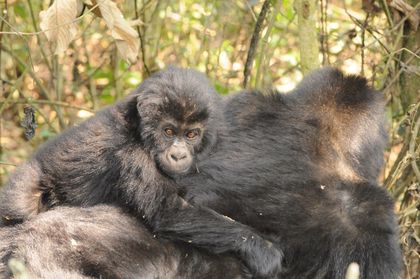 An infant Grauer's gorilla rides on an adult gorilla's back.

The population of the world's largest ape has collapsed over the last two decades. Fewer than 4,000 Grauer's gorillas remain in the wild, and now conservationists warn that the animals are at risk of extinction.

Officials from the International Union for Conservation of Nature (IUCN) announced Sunday (Sept. 4) that they're raising the threatened status of the Grauer's gorilla from "endangered" to "critically endangered," the highest category before extinction.

"Critical endangered status will raise the profile of this gorilla subspecies and bring attention to its plight," Andrew Plumptre, the lead author of the new listing, said in a statement. "It has tended to be the neglected ape in Africa, despite being the largest ape in the world." [Image Gallery: 25 Primates in Peril]

Grauer's gorillas (Gorilla beringei graueri) are a subspecies of the eastern gorilla. They are found in fragmented forest habitats in the eastern part of the Democratic Republic of Congo, where they mainly subsist on fruit and other plants and can grow up to 5.5 feet (168 cm) tall and weigh up to 440 lbs. (200 kg).

Earlier this year, the Wildlife Conservation Society and Fauna and Flora International released a report documenting a77-percent drop in the number of Grauer's gorillas over the span of a single generation, from an estimated 17,000 individuals in 1995 to 3,800 today.

The authors of the report pointed to bushmeat hunting and civil war in the DRC as major drivers of the population collapse and recommended that the species be listed as critically endangered.

The new listing means that all gorillas -including eastern and western gorillas -are now considered critically endangered.

The other subspecies of the eastern gorilla is the mountain gorilla (Gorilla beringei beringei), which is already listed as critically endangered. The population of mountain gorillas has, however, been increasing. There are now an estimated 880 individuals, up from about 300 in 2008, according to the IUCN's latest data.

The changes to the IUCN's Red List of Threatened Species were announced at the organization's World Conservation Congress in Hawaii.

Among the other species whose threatened status was raised was the plains zebra (Equus quagga), which was once considered a species of "least concern" but is now "near threatened." The animal's population in Africa dropped by 24 percent over the past 14 years, from around 660,000 individuals to just over 500,000 animals, mostly due to hunting, according to the IUCN.

In a bit of good news, the giant panda (Ailuropoda melanoleuca), which had been listed as endangered since 1990, had its status downgraded to "vulnerable." The IUCN lauded conservation efforts that have helped boost the panda population in China, but warned that climate change could wipe out a large chunk of the bears’ bamboo habitat during the next century.