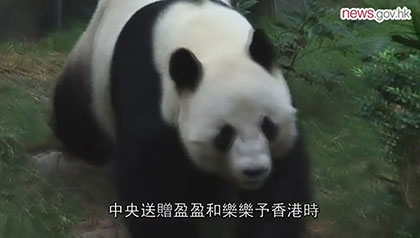 WATCH ABOVE: Jia Jia, the world's oldest captive panda has passed away at the age of 38. The female panda, who was more than 100 years old in human terms, was put down at Hong Kong’s Ocean Park due to her “rapidly deteriorating health conditions,” according to the park.

HONG KONG – The world’s oldest-ever panda in captivity was euthanized Sunday at the Hong Kong theme park where she lived because her health had deteriorated.

Ocean Park said in a statement that a veterinarian euthanized 38-year-old Jia Jia to prevent further suffering and for ethical reasons.

Guinness World Records recognized Jia Jia as the oldest giant panda to live in captivity. The average lifespan for a panda in the wild is 18 to 20 years, while in captivity it’s 30 years, according to Guinness.

Born in the wild, Jia Jia was taken to live at a wildlife reserve’s breeding centre in central China’s Sichuan province in 1980, when she was around 2 years old.

She and another panda, An An, were given to Hong Kong as a gift from Beijing in 1999, on the second anniversary of the city’s handover from Britain to China.

Pandas, a beloved symbol of China, were long considered one of the world’s most endangered animals, although last month a leading international group lowered its classification to “vulnerable.”

The International Union for the Conservation of Nature cited conservation efforts that helped the wild panda population jump to 1,864 in 2014 from 1,596 in 2004. However, the Chinese government rejected the group’s decision, saying the panda’s status was no less serious because its natural habitats have been splintered by human and natural causes.

Jia Jia, who celebrated her birthday in August, had shown signs of poor health in her old age, including high blood pressure and arthritis, which required regular medication. Over the past two weeks, her condition had worsened significantly, with her weight falling as she stopped eating.

“This is a day we knew would eventually come, but it is nevertheless a sad day for everyone at the park, especially for the park’s keepers who took care of her over the years,” Ocean Park’s chairman, Leo Kung, said in the statement.

Three other pandas still live at Ocean Park – 30-year-old An An, and Ying Ying and Le Le, both 11.