Threatened Owls Pushed Out of Home by Foes 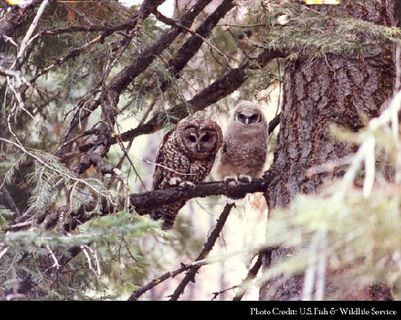 The northern spotted owl was championed by environmental groups who sought to see it protected.

A threatened species of owl is losing a turf war in the Pacific Northwest.

Northern spotted owls are getting edged out of their already declining habitat by invading barred owls, a new study finds.

Researchers pored over 22 years of data from a study site in Oregon covering 386 square miles (1,000 square kilometers) where the habitats of the two species overlap. In this area, both owl species were more likely to abandon a neighborhood when their rival was present, the researchers found. [Whooo's in There? Images of Amazing Owls]

Northern spotted owls (Strix occidentalis caurina), whose numbers have been declining, were more sensitive to this competition, the study revealed. Meanwhile, barred owls (Strix varia), which have more offspring and a more diverse diet and use of habitat, have experienced a population boom.

"Scientists in other parts of the Pacific Northwest have suggested that differences in the habitat preferences of the barred owl and spotted owl might allow them to coexist," study author Charles Yackulic, a research statistician with the U.S. Geological Survey, said in a statement. "While the two species showed different habitat preferences in this study site, there is still substantial overlap in habitat use. As a result, in recent years, barred owls have frequently excluded spotted owls from habitat that they would otherwise prefer."

When spotted owls are forced to leave their preferred neighborhood, the birds sometimes take up residency in a less suitable habitat where they might not have as much success reproducing, the researchers say.

Besides competition with barred owls, spotted owls are threatened by a loss of old-growth forest habitat in California, Oregon and Washington. In another recent setback for the species, rat poison used in illegal marijuana farms in Northern California killed a few of the birds. The nocturnal creatures are listed as threatened under the U.S. Endangered Species Act. There are estimated to be less than 4,000 breeding pairs from southwestern British Columbia, in Canada, to northern California, according to the International Union for Conservation of Nature (IUCN).

Yackulic and colleagues also used a computer model to project future population dynamics of the two species. They found that barred owls are likely to push spotted owl numbers even lower over the next few decades.

The findings were detailed in the journal Ecology this month.