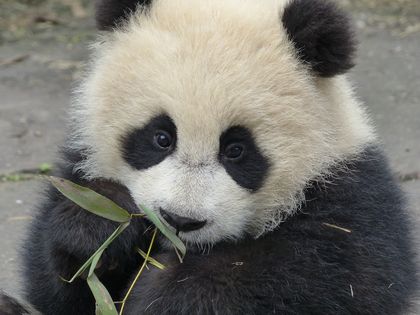 There's a secret to making panda babies, and it looks a little bit like love.

Pandas are more likely to produce young when they have a preference for the partner they're meant to mate with, a new study finds. If "love" is too strong a word for this preference, it's safe to say that panda lust, at least, plays a role in reproductive success.

In a new study published Tuesday (Dec. 15) in the journal Nature Communications, researchers allowed pandas to pick their own mates by letting them observe a pair of opposite-sex bears through barriers in a special enclosure. Bears showed their romantic interest by making chirping noises and scent-marking near their preferred partner.

This freedom of choice turned out to have a major effect on the likelihood of pandas reproducing. Overall, mutual attraction raised the rates of successful mating and cub-rearing from around zero percent when the two bears weren't interested in one another to 75 percent when they were both attracted. [Photos: A Panda Cub Grows Up]

Male choice mattered, too - a surprising finding, given that females that do all the gestation and rearing are generally thought to be pickier than males who invest less of themselves. But panda males invest considerable time and energy in wooing females in the wild and fending off rival males, researcher Meghan Martin-Wintle of the Institute for Conservation Research, San Diego Zoo Global and PDXWildlife in Portland and her colleagues wrote. Thus, they have to be choosy about which female pandas they pursue.

Overall, the researchers found, mutual attraction can improve panda reproduction. Giving pandas free reign over their mate choices, however, may be tougher than it sounds. Conservation breeders have to be careful to ensure genetic variability in endangered species like pandas, which are few in number. But if breeders were to pre-screen bears for genetic diversity and then check in on how the pandas respond to one another, that would allow for "the best of both worlds," Martin-Wintle and her colleagues wrote.

The research was conducted at the Bifengxia Chinese Conservation and Research Center for the Giant Panda in Sichuan, China. China is working to reintroduce pandas into the wild, a goal that will require breeding more pandas than in the past. To meet this goal, the researchers wrote, biologists will need a better of understanding of how pandas reproduce on their own in the wild.