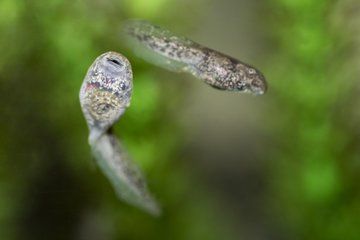 When they grow up, they'll be big, gray-green and saggy-skinned, but for now, the newest critically endangered babies at the Denver Zoo are slender and sleek.

The hatchlings are the first tadpoles of Lake Titicaca frogs (Telmatobius culeus) ever born in North America. They're the offspring of two frogs from the Huachipa Zoo in the amphibians' native Peru. The Denver Zoo is the only Northern Hemisphere institution caring for this frog species, which is native to a single high-altitude lake in the Andes. The tadpoles hatched on Valentine's Day (Feb. 14).

Lake Titicaca frogs are critically endangered because of environmental contamination and poaching. They're the key ingredient in a traditional health shake called Jugo de Rana, or frog juice, which is rumored to increase vitality and virility (there's no evidence that it does). In an effort to conserve the species, the Denver Zoo partnered with Cayetano Heredia University and the Huachipa Zoo in Lima to bring 20 adult Lake Titicaca frogs to Colorado in November 2015. [See Photos of the Only Lake Titicaca Frogs in the US]

"In the time we've had the Lake Titicaca frogs, we have gained so much insight to this unique species," Tom Weaver, assistant curator of reptiles and fish at the Denver Zoo, said in a statement. "We feel very proud that we are able to provide that opportunity."

Lake Titicaca sits at an elevation of 12,500 feet (3,811 meters), and its waters are chilly — Lake Titicaca frogs are adapted to survive in water with temperatures of 50 to 60 degrees Fahrenheit (10 to 17 degrees Celsius). The frogs can grow to 20 inches (50 centimers) long and weigh up to 2 pounds (0.9 kilograms). Their baggy skin provides them extra surface area so that they can more efficiently pull oxygen from the water, according to the zoo.

Their skin has given them the rather unappealing nickname "scrotum frog," which is not the only reason one might not want to grind them up into a smoothie. Wild frogs can also carry cholera, according to Denver Zoo officials. The grandparents of the current Denver Zoo tadpoles were confiscated from the illegal wildlife market in Peru and Bolivia and kept at the Huachipa Zoo. The parents hatched as tadpoles at that zoo before making the trip to Denver in a cooler.

Most of the tadpoles are now on display in Denver. When they mature into frogs, some will stay at the Denver Zoo, while others will be sent to other accredited institutions. Before the Denver Zoo received its Lake Titicaca frogs, it had been more than 20 years since any zoo in America had housed the species.

"Our work is raising much-needed awareness for the plight of this frog for our guests, children and adults, and will soon do the same for those who visit the other institutions which will soon be a home for the species," Matt Herbert, the zoo's director of conservation education, said in the statement.