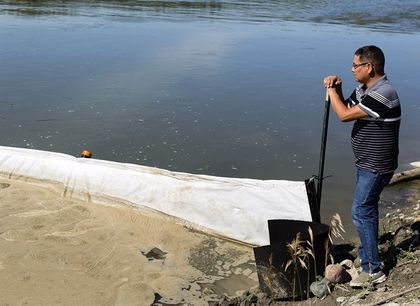 Chief Wally Burns of the James Smith Cree Nation surveys the Saskatchewan River next to an oil boom he had a hand in setting up, on Friday, August 25, 2016, in this handout photo. paNow.com, Bryan Eneas / The Canadian Press/HO

A First Nation in northern Saskatchewan says oil from the Husky Energy pipeline leak has shown up in the spawning grounds of an endangered species.

Officials from James Smith Cree Nation said an oil plume and foam was discovered in the Saskatchewan River where lake sturgeon spawn.

The Committee on the Status of Endangered Wildlife in Canada said the fish are an endangered species.

Chief Wally Burns said the First Nation, about 60 kilometres east of Prince Albert, ordered residents to not swim, hunt, fish or gather along the Saskatchewan River after the contaminant showed up Aug. 21.

It took more tests on Friday, after the most of the plume appeared on the First Nation, and are waiting for the results that can determine if the material is from the Husky spill.

The pipeline was carrying heavy oil mixed with a lighter petroleum product that enables the crude to flow.

The province said last week that almost 75 per cent of the estimated 225,000 litres of petroleum that spilled has been recovered.

The Cree First Nations said it has taken its own water and soil samples for testing for hydrocarbons and point of origin.