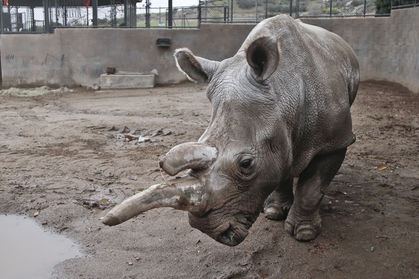 Nola, a 40-year-old northern white rhino who is only one of five remaining of the species, wanders around her enclosure at the San Diego Zoo Safari Park on a cold winter day in Escondido, Calf. The survival of the northern white rhinoceros and dozens of other species could hinge on the Frozen Zoo, whose collection amassed over nearly 40 years has become the largest gene bank of its kind. AP Photo/Lenny Ignelzi

ESCONDIDO, Calif. – Whenever an endangered animal dies at the San Diego Zoo, researchers race out, regardless of the hour, to remove its sperm or eggs, maybe a bit of ear or eyeball, and carefully freeze the cells in liquid nitrogen.

Today, the survival of the northern white rhinoceros and dozens of other species could hinge on the collection amassed over nearly 40 years that has become the largest gene bank of its kind: The Frozen Zoo.

The icy vials may one day be used in experiments to resurrect recently extinct animals, like the Hawaiian Po’ouli bird. The stainless steel tanks hold the genetic material of more than 10,000 individual animals from more than 1,000 species and subspecies.

The Frozen Zoo’s work has taken on renewed urgency since the San Diego Safari Park lost 42-year-old Angalifu to cancer in December, leaving only five northern white rhinos left in the world – and all unable to reproduce.

Barbara Durant, director of reproductive physiology at the San Diego Zoo Institute for Conservation Research, a.k.a. the Frozen Zoo, stands on the rail of a nitrogen-cooled stainless steel vat holding hundreds of vials of animal cells at the Beckman Center at the San Diego Zoo’s Safari Park in Escondido, Calif.

Scientists are racing to find the best way to utilize the bank’s frozen sperm to produce another one before the northern white goes extinct, which could happen within a decade.

Critics question whether it’s worth spending millions of dollars on species that are down to so few.

The bank is valued as a genetic archive that has helped advance artificial insemination, in vitro fertilization, cloning and stem cell technology. But debate is stirring over how far such research should go.

Paul Ehrlich, a senior fellow at the Stanford Woods Institute for the Environment at Stanford University, said the world needs to address the problem’s root causes, such as population growth and climate change.

“Screwing around with science to save a white rhino might be fun and I would like to see it preserved and am all for biodiversity, but it’s so far down the list of things we should be doing first,” he said.

With species going extinct at a faster rate, zoos are taking on greater conservation roles and facing decisions on which animals are worth trying to save. Some may be extinct by the time another one is reproduced and possibly never live in the wild.

The northern white’s natural habitat is in countries like Sudan and Congo, which have been unable to stop poachers. The horn is coveted in Asia as an aphrodisiac, creating a market that threatens all rhino species.

“We can do all kinds of razzle-dazzle things but it’s one thing to make another animal or two or three, but it’s quite another to make a sustainable population from a genetic standpoint,” said George Seidel, a Colorado State University professor who has written about resurrecting the woolly mammoth. 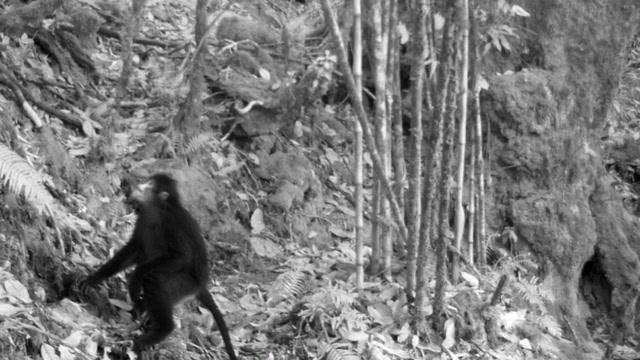 The challenges, however, are not insurmountable for critically endangered species or possibly recently extinct species, said Barbara Durrant, director of reproductive physiology at The San Diego Zoo Institute for Conservation Research, which houses the Frozen Zoo.

“We’re not so much interested in bringing back dinosaurs or mammoths,” she said.

The Frozen Zoo holds the cell cultures from 12 northern white rhinos – more than the living population: “There have been other species that have come back from numbers that small so we think there is good reason we can do this with the northern white rhino,” she said.

Sperm from the Frozen Zoo has been used to reproduce endangered animals from the giant panda to the Chinese monal pheasant. Its frozen cells also were used to clone two endangered types of cattle. The gaur lived only a few days while the banteng survived for seven years before being put down after breaking a leg. Both animals, however, had genetic defects.

READ MORE: Calgary Zoo works to save one of Canada’s most endangered birds

The northern white rhino and the drill monkey were the first endangered animals to have their cells transformed into stem cells and stored at the Frozen Zoo.

Theoretically, stem cells can produce any body tissue. That means thawed stem cells from a male rhino could produce both sperm and egg in the lab, but the method has been done only once – in a mouse.

Artificial insemination has seen success in producing other rhino species. Northern white rhino semen could be used to impregnate the closely related southern white to make a hybrid.

Scientists are also looking at in vitro fertilization but that technique has never been done on any rhino species.