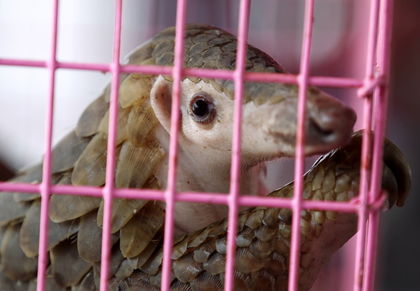 This pangolin was rescued in Thailand but most captive creatures aren’t so lucky.

Few people are familiar with. It is a shy creature, about as big as a medium-sized dog, and its diet consists of ants and termites. Most distinctively, it has armoured plates and will curl into a ball to resist predators. The eight different species of pangolin live across most of Africa, India, southern China and Southeast Asia.

Despite their recognition as an endangered species and the supposed protection that brings, pangolin are now the most trafficked wild mammal species in the world. Their scales have been used for millennia in Asian medicine. When roasted, they are alleged to detoxify and drain pus, relieve palsy, and stimulate lactation. The animals are either traded alive (involving appalling cruelty) or killed and their scales removed to meet culinary and medicinal demand in East and Southeast Asia.

In parts of Africa, scales are also used as a kind of traditional medicine known as “muti”, and African pangolins are also being increasingly exploited to satisfy growing demands from Asia. In July 2014 customs officials in Vietnam seized an astonishing 1.4 tonnes of dried pangolin scales from a cargo ship arriving from Sierra Leone.

This was just one instance among many. Over the past decade thousands of pangolins and dozens of tonnes of scales have been seized in China and Vietnam. And what gets confiscated is but a fraction of what slips through unnoticed.

Each pangolin yields only about half a kilo of scales; the arithmetic of pending extinction is thus simple for a species that bears only one offspring per year. Logbooks apprehended in 2009 from one trafficking syndicate in the Borneo revealed 22,000 pangolins were killed over a 21 month period.

International wildlife protection is simply not keeping pace with the resolve and devious methods of illegal traders, such as posting parcels of pangolin scales by mail (last year Beijing Customs uncovered more than one tonne of posted scales). Furthermore, illegal traders exploit corruption at border controls to facilitate the illegal supply chain. This is despite global legislation and national laws (notably in China and Vietnam), which carry severe punitive sentences, aimed at stemming cross-border trade.

The illegal trade in fauna and flora (excluding fisheries and timber) is big business, worth somewhere between US$7 and US$23 billion each year according to the UN and Interpol. Of this total, however, the sale of valuable commodities such as ivory, rhino horn and tiger accounted for only around US$75m in 2010, despite getting the most attention in Asia.

Of course ivory poaching is awful, but it is important to recognise the sheer numbers involved when we talk about trade in other species. That 1.4 tonne shipment of pangolin scales represented around 3000 dead animals.

Cutting out the supply is one thing, but reducing consumer demand is also essential. Lamentably, even the government-backed Chinese Pharmacopoeia Commission supports the medical value of pangolin scale. Ordinary citizens, often sick or elderly, searching for a traditional remedy are thus mislead and become unwitting participants in this species’ demise.

While other wildlife products such as ivory and rhino horn are prohibitively expensive for most Chinese consumers, and symbolise elite status within society, pangolin is more affordable and easily attainable. Its price has been increasingly recently, yet it is still a price consumers seem willing to pay.

Clearly, people in China and across Southeast Asia aren’t going to be priced out of the pangolin market any time soon so it is imperative modern medicine is adopted and that we achieve a step-change in public understanding of illegal trade and conservation.

The exact extent to which this illegal exploitation affects wild pangolin populations remains largely unknown – although it would seem totally unsustainable. Further ecological research is crucial to establish how many pangolins are out there in the wild and how best to protect them.

The authors, Chris Newman, University of Oxford; David Macdonald, University of Oxford, and Youbing Zhou, Chinese Academy of Sciences, do not work for, consult to, own shares in or receive funding from any company or organisation that would benefit from this article. They also have no relevant affiliations.