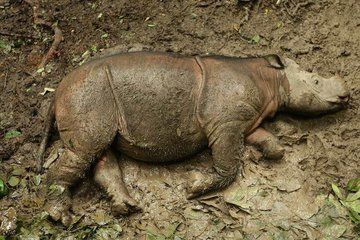 One of the last three Sumatran rhinoceroses in Malaysia has died, the Borneo Rhino Alliance has announced.

The rhino, named Puntung, was about 25 years old and lived at Malaysia's Tabin Wildlife Reserve in Sabah. Wildlife veterinarians euthanized her on June 4, eight days after discovering that the critically endangered animal had squamous cell cancer. The cancer had spread rapidly, and intensive treatment would have bought Puntung only a few more months of life penned in an indoor enclosure, the Borneo Rhino Alliance reported on its Facebook page.

"Sumatran rhinos wallow in mud for at least six hours daily and become increasingly stressed if kept in clean, closed facilities," the post read. "A stress-free life for Puntung was simply not going to be possible. And so we made the very difficult choice of ending her suffering and giving her peace." [6 Extinct Animals That Could Be Brought Back to Life]

Sumatran rhinoceroses (Dicerorhinus sumatrensis) are the smallest of all rhino species. They're also the most endangered, according to the International Rhino Foundation (IRF). With Puntung's death, there are only two individuals left in Malaysia: Tam, a middle-age male; and Iman, a female. Both are kept at the Borneo Rhino Sanctuary in the Tabin Wildlife Reserve.

The Sumatran rhino is now extinct in the wild in Malaysia. In Indonesia, fewer than 100 Sumatran rhinos survive in the wild. Poaching has sliced the population in half over the past 20 years, according to the IRF. However, the Borneo Rhino Alliance argues that the problem for Sumatran rhinos is not current habitat loss or illegal hunting, but simply a problem of too few rhinos to effectively reproduce. The problem, said Borneo Rhino Alliance Spokesman John Payne, is that since the 1930s there have not been enough Sumatran rhinoceroses in the same place. The low population density has led to something called the Allee effect, in which individuals in small populations become less fit due to factors like limited genetic diversity.

Puntung was likely a survivor of poaching herself. She was missing her front left foot, probably because it was caught in a poacher's snare when she was a baby. As an adult, she weighed about 1,150 lbs. (520 kilograms) and was known at the wildlife sanctuary for her gentle disposition. She was captured in the wild in 2011 and was brought to the sanctuary for her own protection and as a part of a failed attempt to establish a captive breeding program.

In early April of this year, Puntung developed an abscess on her jaw and was bleeding from her nostrils. After a crowdfunding effort, specialists were flown in from around the world, and Puntung had successful dental surgery on April 19, in which three infected and damaged molars were removed.

On Facebook, Puntung's keepers hailed the surgery as a lifesaver. But bad news followed on May 27: The underlying cause of the jaw swelling turned out to be cancer. The rhino was having trouble breathing and was no longer vocalizing. Painkillers and euthanasia were the only options, the Borneo Rhino Alliance said. According to news reports, three keepers stayed with Puntung in her forest enclosure around the clock in the last week of her life, watching for signs that her suffering had become too great. As her breathing became increasingly labored, they made the decision to euthanize Puntung. [See Photos of All 5 Species of Rhinos]

The group planned one last effort to extract eggs from Puntung after her death, sending her ovaries to a lab in Serdang, Malaysia, in the hope that viable eggs could be removed. Both Puntung and the other female rhino at Tabin had uterine cysts that made typical reproduction impossible. As is being done in a separate attempt to save the similarly endangered northern white rhinoceros (Ceratotherium simum cottoni), veterinary experts and conservationists are attempting to use assisted reproduction to breed Sumatran rhinoceroses. With so few animals left on the planet, every individual's genetic material counts for preserving diversity. The group is seeking funding to continue this work.

Editor's Note: This story was updated to add more details about the dwindling number of Sumatran rhinos and to correct Puntung's age.