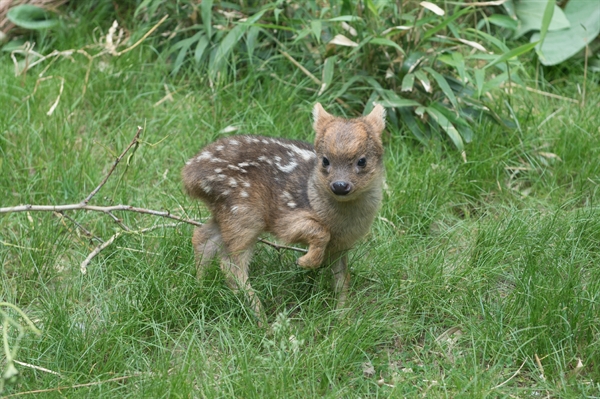 What's cuter than a baby deer? A baby deer you can hold in one hand, of course.

Just 6 inches (15 centimeters) tall at birth and weighing less than 2 pounds (0.9 kilograms), the remarkably tiny animal was born at the Wildlife Conservation Society Queens Zoo in Flushing, New York, last month. Belonging to one of the world's smallest deer species, this southern pudu deer (Pudu puda) will grow to be just 12 to 18 inches (30 to 46 cm) tall at the shoulder, according to zoo officials.

Pudu (Poo-doo) deer are indigenous to temperate rainforests of South America, where they hang out in dense underbrush and bamboo groves. There are two distinct species of pudu - the southern pudu that inhabit the lower Andes of Chile and southwest Argentina, and the northern pudu (Pudu mephistophiles) that inhabit the lower Andes of Ecuador, northern Peru and Colombia. Though the southern pudu deer is tiny, its cousin is actually a tad smaller, making the northern pudu the smallest deer species in the world, according to the Woodland Park Zoo in Seattle (home to several southern pudu). [Photos: See the World's Cutest Baby Wild Animals]

The newborn male pudu at the Queens Zoo was born May 12, and the miniature critter is still nursing. But zoo officials say the fawn will soon move on to solid foods, such as fresh leaves, grains, kale, carrots and hay. In the wild, these deer also munch on leaves, as well as bamboo, bark, twigs, blossoms and fruit.

The Queens Zoo's newest pudu joins two other, adult deer on exhibit - its parents, who have successfully produced a fawn three years in a row. In the wild, pudu deer tend to live either in pairs or alone and are almost never found living in groups of more than three animals, according to the Woodland Park Zoo. Newborn pudus typically remain with their mothers for eight to 12 months. After three to five months, this baby deer will lose its spots, and at eight months it will start to grow its first spike antlers, which could eventually reach 2 to 4 inches (5 to 10 cm) in length.

The southern pudu's diminutive stature is no coincidence. Its short legs and small body allow it to move quickly through dense vegetation to escape its predators. Puma, fox and even domestic dogs hunt the southern pudu, which runs in a zigzag pattern (and can also swim across streams) to make its getaway. It also can make a sound like a bark if threatened.

Like many deer species, the pudu uses scent markings to communicate with other deer. In addition to urinating and defecating in certain areas, they also use their pre-orbital and frontal scent glands (located near the animal's eyes) to discharge a strong-smelling secretion onto trees and leaves. Both scent-marking strategies may be employed to mark their territories or to communicate their location to potential mates, according to the Woodland Park Zoo.

The baby deer born last month at the Queens Zoo will likely live for about 15 years in captivity (life span in the wild is a bit shorter, at 12 to 14 years). But these miniature creatures are quickly disappearing from the wild as their natural habitat is being cleared for agriculture and logging, as well as other human activities. The deer are bred in captivity as a part of the Species Survival Program (SSP) developed by the Association of Zoos and Aquariums. The southern pudu deer is designated as a vulnerable species by the International Union for Conservation of Nature.