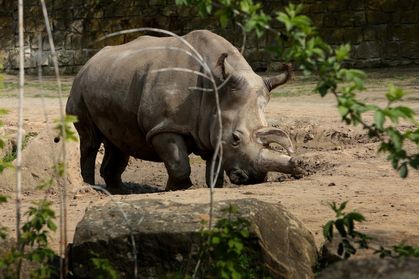 One of the last five northern white rhinoceroses in the world has died.

NabirÃ©, a 31-year-old female northern white rhino, died of a ruptured cyst, authorities at the DvÅ¯r KrÃ¡lovÃ© Zoo in the Czech Republic announced today (July 28). NabirÃ©'s death leaves only three females of this subspecies alive. One male, Sudan, survives on a reserve in Kenya.

Northern white rhinos (Ceratotherium simum cottoni) have been on the brink of extinction for years because of poaching and habitat loss. According to Ol Pejeta Conservancy, home to Sudan and two of the remaining female northern whites, there were only a few dozen of the animals living in the Democratic Republic of the Congo in the early 2000s. The remaining four wild survivors were last seen in 2007 and are presumed dead. [In Photos: The Last Surviving Northern White Rhinos]

Now, the only northern whites left behind are Sudan, 42, and three females. Najin and Fatu live with Sudan in Kenya but are not capable of carrying babies - Najin because of her age and Fatu because of a uterine condition. The San Diego Zoo is home to Nola, now the only female surviving outside of Africa. She, too, is beyond reproductive age.

NabirÃ© was born in captivity on Nov. 15, 1983. She was plagued with uterine cysts, making it impossible for her to breed naturally. Conservationists hoped, however, that they could harvest eggs from her healthy left ovary for use in in vitro fertilization (IVF). The goal is to artificially fertilize an egg using sperm from Sudan or frozen white rhino sperm from a long-dead animal. This egg would then be transplanted into a southern white rhinoceros, the closest living relative to the rare northern whites.

"The pathological cyst inside the body of NabirÃ© was huge. There was no way to treat it," JiÅ™Ã­ HrubÃ½, a rhino curator at the zoo, said in a statement.

After NabirÃ©'s death, zoo researchers removed the ovary in hopes of saving some of the rhino's now-rare genetic material.

Though more female rhinos than males survive, it's actually eggs that are in short supply, researchers told Live Science in June. Northern white rhinos ovulate only one egg at a time every 30 days or so, which makes collecting mature eggs a slow process. Immature eggs can be harvested from the ovaries, but researchers have to develop techniques to mature those eggs in the lab.

Scientists also have to develop IVF procedures that work on rhinos, which has never been done before.

"Every species requires different culture conditions, and that's because the actual conditions in the uterus in the animal are different," said Barbara Durrant, director of reproductive physiology at the San Diego Zoo Institute for Conservation Research.

Durrant and her colleagues around the world are trying to make use of research on horse IVF, as horses are close relatives of rhinoceroses. But IVF is also difficult in horses, Durrant said in June.

The DvÅ¯r KrÃ¡lovÃ© Zoo plans to continue its efforts to save the subspecies.

"It is our moral obligation to try to save them," zoo director PÅ™emysl Rabas said in a statement. "We are the only ones, perhaps with San Diego Zoo, who have enough of collected biological material to do so."

The loss also struck NabirÃ©'s keepers on a personal level.

"NabirÃ© was the kindest rhino ever bred in our zoo," Rabas said.