No, the US Isn't Using Vaccine-Laced M&Ms to Save Ferrets 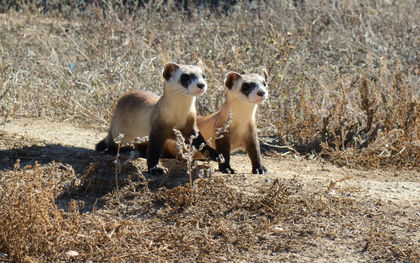 FWS is working to recover the population of endangered black-footed ferrets in the U.S.

Recent reports have claimed that the U.S. Fish and Wildlife Service is trying to save endangered ferrets by firing vaccine-laced M&Ms from drones into the animals' habitats. Though the bizarre-sounding scheme caught the media's attention, agency officials say the reports are misleading.

Yes, the Fish and Wildlife Service (FWS) is investigating drones as a way to distribute vaccinations - but not using M&Ms, and not for ferrets directly, agency officials told Live Science.

The FWS is working to recover the population of endangered black-footed ferrets in the U.S., which is at risk due to an exotic plague introduced via fleas in the early 1900s. The plague affects both ferrets and their main prey: prairie dogs. With more than 90 percent of their diet made up of prairie dogs, and their primary habitat being prairie dog colonies, the black-footed ferret population has suffered, according to the FWS. [6 Extinct Animals That Could Be Brought Back to Life]

Previous efforts to mitigate the plague involved flea control, using a powder insecticide. But, some fleas have built up a tolerance to the insecticide. An oral vaccine that could help revive the prairie dog population was developed by Tonie Rocke, a research epizootiologist at the U.S. Geological Survey's National Wildlife Health Center, and researchers at the University of Wisconsin, Madison.

"We’re hoping this oral plague vaccine for prairie dogs will be another tool in the toolkit to mitigate the effects of plague in places where we want to maintain and expand prairie dogs in support of ferret recovery," Randy Matchett, a supervisory wildlife biologist with the FWS, told Live Science.

The oral vaccine, also referred to as a bait, is a food-grade pellet containing peanut butter and the vaccine. At only 0.04 ounces (1 gram) and measuring just half an inch (1.3 centimeters) in diameter, the bait is about the size of an M&M.

As its research has escalated, the FWS has moved from small-scale hand production "like you would do in your own kitchen" to an automated process, Matchett said.

However, distribution of the small bait has still proved difficult. At 50 doses per acre - one dose every 30 feet (9 meters) - distributed uniformly, continuing to do so entirely by foot would be too labor-intensive and would take too much time to be efficient.

"The way weêžŒve been distributing the vaccine for the last five years during these experimental trials, there have been people walking with a plastic bag and counting their steps every 30 feet and then dropping one of these baits," Matchett said. "That works on a 20- or 30-acre plot, but when youêžŒre looking at trying to do that over thousands of acres, that becomes pretty labor intensive. A person walking can treat 6 to 8 acres per hour, dropping them one at a time."

This is where the idea of using an unmanned aircraft system (UAS), or drone, came in. But Matchett stressed that using a UAS is still in the developmental phase. He said the agency hopes to conduct a trial run this year using a prototype. [5 Surprising Ways Drones Could Be Used in the Future]

The use of all-terrain vehicles (ATVs) is also being tested to distribute the bait.

"In the end, we think weêžŒll need multiple transportation methods to drop this stuff because not everybody is going to have the ability to use or have access to UAS systems. ATVs are pretty common, but there are a lot of places that the terrain or vegetation won’t allow ATVs," Matchett said. "So some places might still be on foot."

This will be the first year of vaccine distribution beyond the experimental trials, Matchett said. The manufacturing process is complete, with just more than 300,000 baits awaiting distribution.

"When we do these vaccinations, weêžŒre committed to vaccinating annually for many years to come," Matchett said. "So this is our first year just trying to see: can we treat a thousand acres? And then I expect to treat that 1,000 acres again in 2017 and, hopefully, expand it to larger areas as well. There will be multiple other sites across the West doing the same thing."

Distribution is expected to occur later this month and through the month of August.

Editor's Note: This article was updated to specify the vaccine was developed by the USGS and the University of Wisconsin, Madison.