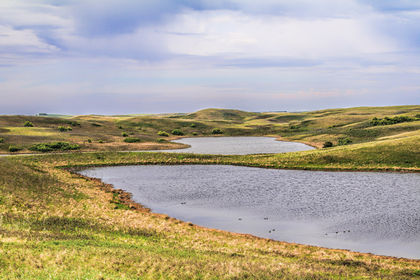 A Nature Conservancy of Canada (NCC) scientist says grasslands are the most endangered ecosystem in the world and is calling for their protection. Juan Cardama / Your Saskatchewan

A Nature Conservancy of Canada (NCC) scientist has penned an essay to explain why endangered temperate grasslands on the Prairies need saving, now.

Dan Kraus wrote that, contrary to public perception, rainforests and coral reefs are not the planet’s most critical habitats in need of conservation. In his opinion, choosing the most endangered comes down to the risk.

“When we look at the risk factors for endangerment  – past loss, current amount of conservation, potential for future loss – the winners (actually the losers) are temperate grasslands, including the good old Great Plains of Oh Canada that stretch across southern Manitoba, Saskatchewan and Alberta and the grasslands of B.C.’s interior,” Kraus explained.

Over 70 per cent of Canada’s prairie grassland has been converted, according to his paper.

“Among the last places on Earth to shelter grasslands at a meaningful scale are the grasslands of North America’s Great Plains, and despite a loss of 70 per cent, Canada has some of largest and best sites remaining,” Kraus wrote.

He said the loss and continued threat was recognized in 2008, when the International Union for the Conservation of Nature declared temperate grasslands as the world’s most endangered ecosystem.

“Grasslands can also showcase how people and nature can coexist,” Kraus wrote.

“Many of Canada’s grasslands have a long history of sustainable cattle grazing. This grazing has supported generations of prairie ranchers, can help to maintain grassland health and benefits many species of prairie wildlife.”

NCC has protected approximately 80,000 hectares of Canadian grasslands, including areas such as Old Man on His Back in southern Saskatchewan.