Most of World's Biggest Beasts Could Be Extinct by 2100 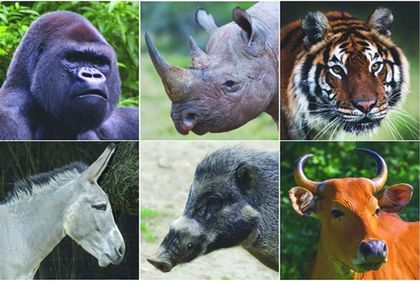 Many of the world's big animals could disappear by the end of the century if conservation measures aren't taken. Some of the animals under threat include: the Western gorilla (Gorilla gorilla) (CR), black rhino (Diceros bicornis) (CR), and Bengal tiger, (Panthera tigris tigris) (EN). Some lesser-known species at risk include the African wild ass (Equus africanus) (CR), Visayan warty pig (Sus cebifrons) (CR), and banteng (Bos javanicus) (EN).

One day, your grandchildren may open their science textbooks and read about elephants, tigers and lions as majestic, extinct creatures that once roamed the Earth like woolly mammoths and Triceratops.

That is the message of a new paper, written by dozens of conservation biologists from around the world.

The authors argue that many of the the world's biggest beasts could be extinct by 2100 if drastic measures are not taken. To forestall that future, governments and conservation organizations should implement several steps to prevent the mass extinction, the scientists report. [Species Success Stories: 10 Animals Back from the Brink]

"To underline how serious this is, the rapid loss of biodiversity and megafauna, in particular, is an issue that is right up there with, and perhaps even more pressing than, climate change," Peter Lindsey, lion program policy initiative coordinator at conservation organization Panthera and a senior co-author of the paper, said in a statement.

It's not news that many of the world's most beloved species are endangered. Poaching and the ever-creeping expansion of human settlement into wild terrain have decimated rhino and elephant populations, corralled big cats into ever-smaller territories, and forced the wildlife into conflict with human populations that live on the fringes of their habitat, several studies have shown. But the global impact of these trends can sometimes be hard to grasp.

To get a sense of how bleak the picture is for the world's nonhuman megafauna, the experts cataloged the species in peril across six continents - all of the species across the globe that the International Union for Conservation of Nature lists as threatened with extinction.

When they looked at the prognosis for each of those species, the forecast was dire, the researchers found. Roughly 59 percent of the world's big carnivore species (those heavier than 33 lbs., or 15 kilograms), such as Bengal tigers; and 60 percent of the world's big herbivore species - such as white rhinos and Western lowland gorillas - could disappear from the Earth if critical steps are not taken.

"There is a risk that many of the world's most iconic species may not survive to the 22nd century," the researchers wrote in the paper.

The threat was particularly dire in sub-Saharan Africa and Southeast Asia, where much of the world's biodiversity resides.

"The more I look at the trends facing the world's largest terrestrial mammals, the more concerned I am we could lose these animals just as science is discovering how important they are to ecosystems and to the services they provide to people," lead author William Ripple, an ecologist at Oregon State University, said in the statement. "It's time to really think about conserving them, because declines in their numbers and habitats are happening quickly."

While the symbolic loss of such iconic species as elephants, rhinos or lions would be paramount, this loss would also have significant effects on the ecosystem, the experts said in the new paper, which was published Wednesday (July 27) in the journal BioScience.

Still, this big-animal-free future isn't inevitable. The team outlines 13 steps that could be taken to forestall the impending loss. Among them are acknowledging the scope of the problem, recruiting governments and nongovernmental organizations to stop practices that harm some of the species under threat, and finding ways to funnel the value of these megafauna into the communities that live among them (for instance, using tourist dollars from natural preserves in poor countries to help communities that live nearby).

The team also wants to foster an international consensus on the urgency of the crisis. In addition, big creatures could be reintroduced into areas they've been eliminated from, using time-tested approaches that have been validated scientifically, the experts said. Examples of creatures that have been reintroduced are Yellowstone National Park's wolves and the PÃ¨re David's deer.