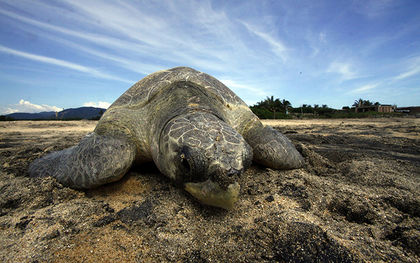 An Olive Ridley sea turtle (Lepidochelys olivacea) arrives to spawn during a nesting at Ixtapilla beach, in Aquila municipality on the Pacific coast of Michoacan State, Mexico, on Octuber 13, 2013. HECTOR GUERRERO/AFP/Getty Images

MEXICO CITY – Mexico is objecting to a U.S. decision to negatively certify it for not doing enough to reduce the deaths of endangered sea turtles in fishing nets.

Mexico said it “regrets” the U.S. decision, which could lead to a ban on some Mexican sea products if it doesn’t bring protections up to U.S. standards.

The Mexican Commission of Aquaculture and Fishing said Friday it “is committed” to sea turtle conservation that allow turtles to escape or avoid nets.

Mexico has put in place restrictions on the use of certain fishing nets, hooks and traps that are known to kill sea turtles.