Lollipops Could Lure Elusive Tree Rat Out of Hiding 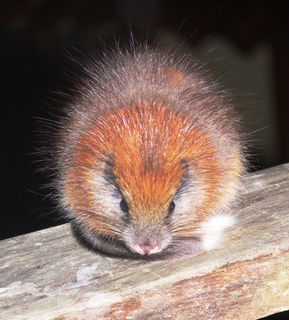 The elusive Santa Marta Toro was thought extinct for 113 years, until one was spotted in the mountainous rainforests of Colombia. Now researchers are using lollipops to lure them out again.

A fuzzy, orange tree rat that was once thought to be extinct may be lurking in the mountainous forests of Colombia, and now researchers are pulling out all the stops to find the species again, including lacing their camera traps with candy.

When the rodent, called the Santa Marta Toro, was spotted in 2011, it was the first time the species had been seen in over 100 years. However, the Toro appears to have gone back into hiding, as it has not been seen since then.

"The Toro is an amazing example of conservation hope - it was a species that was [thought to be] gone, but still exists," said Nicolette Roach, a doctoral candidate in wildlife and fisheries science at Texas A&M University and an associate conservation scientist with Global Wildlife Conservation. Roach spent her summer searching for the secretive rodent. "This shows that there are still species that are holding on, even in the face of all these changes that are going on in the world," she said. [Photos: Hidden Cameras Find Diverse Animals in Tropical Forests]

The Santa Marta Toro, which is also known as the Santa Marta Tree Rat (Santamartamys rufodorsalis), is about the size of a guinea pig. It sports thick, bright, orange-red fur and has a very long, red, black and white tail, similar to that of other tree-rat species. It lives in the dense forests of the Sierra Nevada de Santa Marta mountain range in Colombia.

In hopes of learning more about the species, Roach and other scientists are trekking though Colombia's El Dorado Nature Reserve, attempting to lure the Santa Marta Toro with sweet treats.

Prior to its rediscovery in 2011, the strange rodent was thought to be extinct for 113 years, as there were no documented sightings during that time, Roach said.

Between early June and August of this year, Roach and her colleagues set up camera traps in trees surrounding the El Dorado Nature Reserve Ecotourism lodge, where the Santa Marta Toro was spotted in 2011. But these were not ordinary camera traps - they were adorned with cherry-flavored, heart-shaped lollipops.

Roach has been studying the Santa Marta Toro for about three months, but during her stay in Colombia, the elusive species did not make an appearance on camera.

The Santa Marta Toro is a small, solitary, arboreal, nocturnal species, which is one reason why these creatures are so difficult to study and even locate in the wild. In addition to the camera traps, Roach and her team conducted night surveys to increase their odds of spotting the elusive Toro. However, the problem is scientists don't have a clear idea where to search for the Toro.

"Not much is known about the Toro's life-history strategy," Roach said. The species "is really understudied and very difficult to find because we don't actually know the type of habitat they're using; we can only guess based on similar species."

Roach added that people have seen the Santa Marta Toro run across the forest floor and climb upward of 40 feet (12 meters) in trees, so there are a lot of habitation variables that need to be taken into consideration when trying to find this little critter.

Roach plans to return to the El Dorado Nature Reserve next summer to search for the Santa Marta Toro and other small mammal species.