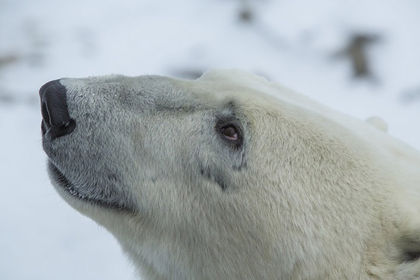 A close up of a wild polar bear. Image courtesy of Google Canada/File photo

TORONTO – When a team of Google’s mapping experts trekked into Canada’s frigid north to create imagery of the frozen tundra outside of Churchill, Man., capturing rare views of wild polar bears wasn’t the only goal.

Sure, the team was able to capture once-in-a-lifetime images of male polar bears sparring and mother bears nursing their young, but Google was also able to capture important visual data that will one day show the changing climate of the Canadian tundra – something that is putting the polar bear population at risk.

“We are witnessing rapid changes in the land that makes up the habitat of the polar bear,” said Krista Wright, head of Polar Bears International, which teamed up with Google for this project.

“Bringing Street View to Canada’s tundra establishes a baseline record of imagery associated with specific geospatial data. This kind of information is absolutely critical if we are to understand and communicate the impact of climate change on this sensitive ecosystem.”

Polar bears are reliant on sea ice in order to hunt for seals – the staple of their diet.

Near Churchill, hundreds of polar bears begin gathering near the western Hudson Bay in late October waiting for the sea ice to freeze in order to hunt for what is usually their first meal in months.

In 2008, the U.S. listed polar bears as a threatened species under the Endangered Species Act, citing sea loss in the Arctic as the biggest threat to the population.

According to Polar Bears International, about 60 per cent of the world’s population of polar bears are in Canada.

The hope is that Google will return year after year to update the imagery of the tundra, eventually giving a time-lapse view of the changes to the polar bear habitat and providing visual research into how climate change may be affecting the bears’ vitality.

“What this collection of imagery gives [Polar Bears International] is an additional tool in their research kit. It allows them to help them assess and respond to what they see as the greatest threat to the bears,” said Google Canada spokesperson Aaron Brindle, who went to Churchill to oversee some of the project.

“Years from now you will be able to go back and have a very clear idea of what a specific part of this very fragile eco system looked like at this precise location – that visual data is important because you can see the impact of climate change first hand.”

But even this first batch of imagery is shedding light on how different each season is in the tundra.

“This year the ice came in really early – earlier than I have seen in the seven years since I have been going there,” Wright told Global News.

“When Google first came the bay was wide open and we were just starting to see the early formation of ice. By the time we left, at the end of season, the bay was filled with ice and we were seeing less polar bears which is a great sign because it meant they were going out to the sea ice [to hunt].”

Mapping the tundra wasn’t easy either.

Using what’s called the “Tundra Buggy” – a specialized vehicle designed to have a low impact on the fragile land – Google hooked up its “Trekker” camera which creates the Street View photography.

According to Brindle, the team slowly drove up the shore of Hudson Bay watching the sea ice form and sometimes getting up close and personal with the giant bears – as you can see by the photos below, they aren’t shy.

GALLERY: Behind the scenes photos of Google mapping the Tundra

The “Tundra Buggy” is designed to have a low impact on the environment.

The team sets up the Google Trekker.

An aerial photo of the Tundra.

A polar bear sits beside the Tundra Buggy while the team maps.

A view of Churchill, Manitoba.

“I think people are used to seeing polar bears through the telescopic lens of a professional photographer and this is different, this is a street view experience and it gives you the idea of what it’s like to navigate this amazing part of Canada’s geography and every once in a while stumble upon this elusive creature,” said Brindle.

Wright also hopes that this unique view of Canada’s north will help inspire users to learn more about polar bears and how important their habitat is to them.

“Hopefully it inspires people to call to action and think ‘What can I do to help save polar bears’.”