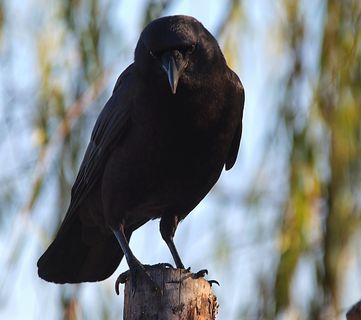 A raven perches on a fencepost.

And although living on live electric lines is dangerous, ravens seem to fare unusually well.

Whether brains or some other factor keep ravens safe, their high roosts on power poles are a danger to other species, Howe and her colleagues reported in January in the journal The Condor: Ornithological Applications. Ravens prey on the eggs and young of the ground-dwelling greater sage grouse as well as those of the endangered desert tortoise, the endangered San Clemente loggerhead shrike and the California least tern. Their vantage point from their power-pole nests makes air attacks easier.

The study found that a whopping 58 percent of raven nests on U.S. Department of Energy land in southeastern Idaho were perched on power poles. Another 14 percent were on other human structures, and just 19 percent were in trees. The proliferation of human structures in the sagebrush ecosystem might explain why raven populations have increased more than 300 percent over the last four decades, the researchers explained.