Getting the Buzz on Bees 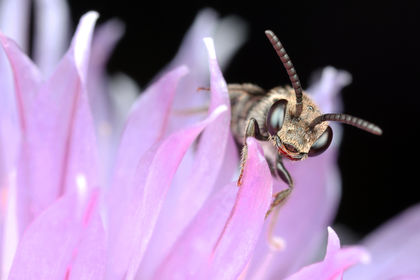 This Research in Action article was provided to Live Science in partnership with the National Science Foundation.

Bees are big business. According to the White House, pollinators contribute more than $24 billion to the U.S. economy. A little more than one-third of that total comes from wild pollinators, such as native bumblebees and exotic alfalfa leafcutter bees. Because pollinators play such a critical role in agriculture and maintaining native ecosystems, their population declines and health challenges have prompted a federal strategy to research, prevent and reverse pollinator losses. (All images courtesy Noah Fram-Schwartz)

To improve the quality of pollinator data available to researchers and policymakers, NSF-funded researchers spearheaded the digitization and consolidation of specimen records from 10 North American bee collections. In just three years, the Digital Bee Collection Network (DBCN) has grown to more than 1 million bee records and is one of the largest sources of quantitative data available on North American bees.

Such a resource is critical to understanding the issues facing pollinators. “Issues such as colony collapse, which affects honey bees, are controversial topics. We need historical baseline data, as well as reliable current data, to address bee declines,” says principal investigator John Ascher, formerly a research scientist with the American Natural History Museum (ANHM) and now working at the National University of Singapore.

In the past, researchers wrote data on cards and, more recently, used word processing or spreadsheet files. “The problem with this local approach is that the data aren’t available for other users,” explains Ascher. “We’re trying to capture the data in a uniform, efficient way and make it widely available.” [Explained: The Physics-Defying Flight of the Bumblebee ]

Ascher and Jerome Rozen of ANHM digitized specimen records using software called Arthropod Easy Capture (AEC) — a data capture tool created by ANHM curator emeritus Randall “Toby” Schuh for an NSF-funded biodiversity project. Starting with the museum’s bee collections, they tagged each specimen with a unique barcode that included details such as habitat location, date discovered and other ecological information, such as the pollinator’s favorite host plant. Researchers at Cornell University, Rutgers University, the University of California Davis and the University of Connecticut also digitized their collections using AEC software.

As part of a broader effort to disseminate comprehensive information on the more than 20,000 known bee species, maps on the DL species pages together with millions of records from the Global BIodiversity Information Facility are available to partners such as the Encyclopedia of Life.

The public can contribute data on plant-pollinator interactions to the network through a “Bee Hunt” — a citizen science project partially funded by NSF.

Editor's Note: Any opinions, findings, and conclusions or recommendations expressed in this material are those of the author and do not necessarily reflect the views of the National Science Foundation. See the Research in Action archive.