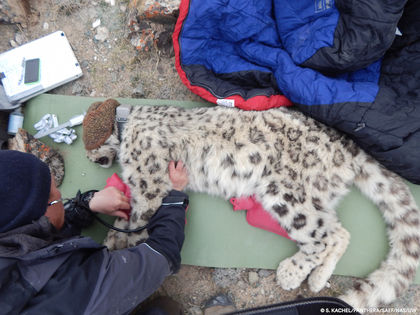 A snow leopard is collared in Kyrgyzstan

Scientists have collared an elusive snow leopard in the remote, rugged mountains of Kyrgyzstan.

The female cat was collared in the Sarychat-Ertash Strict Nature Reserve of Eastern Kyrgyzstan by biologists with the wild cat conservation organization Panthera, the State Agency on Environment Protection and Forestry and the National Academy of Sciences. The mama cat showed signs of having lactated in the past, suggesting she had given birth to at least one cub. This was the second time in six months that conservationists had succeeded in spotting and collaring a fertile female snow leopard in the country.

The sighting suggests the population of snow leopards (Panthera uncia) in this region could be recovering, after decades of relentless poaching, according to the scientists involved. [See Images of the Rare Snow Leopard Being Collared]

"It is so exciting to have two young productive females collared early in this study. It is a clear indication that Sarychat-Ertash, a place where snow leopards were nearly extirpated in the 1990s, is once again a stronghold for the species," Tom McCarthy, executive director of Panthera's Snow Leopard Program, said in a statement. "Kyrgyzstan can be very proud of this turnaround."

The mysterious snow leopard lurks in the frigid, mountainous regions of 12 different countries in Asia. Yet these majestic creatures are often incredibly hard to spot; they glide silently through the snow on big, padded paws, and their thick, mottled white coats provide the perfect camouflage against the rocky, snow-flecked areas they prowl. The big cats are also highly reclusive by nature, meaning many locals who live alongside the cats have never seen them.

For decades, shepherds have hunted the cats to keep them from preying on their flocks.  Poachers have also targeted the majestic snow beasts for their fur and internal organs, which are prized in Chinese medicine.

The snow leopard has been listed as endangered since at least 1986 by the International Union for the Conservation of Nature. However, in recent years, scientists and lawmakers have increased conservation efforts dramatically, expanding the size of protected regions and using everything from camera traps to DNA analysis of snow leopard poop to learn more about the elusive creatures. Those efforts have begun to pay off, and researchers estimate that the population is on the rise in Sarychat-Ertash, with between 4,500 and 10,000 snow leopards now living throughout Asia.

Six months ago, scientists collared the first snow leopard in Kyrgyzstan. That animal was an adult female that was later spotted prowling with three large cubs. The radio collar allowed the scientists an unprecedented look at a snow leopard's life.

"Through collaring, we learn of snow leopards' migration corridors, food preferences and threats to their survival," Abdikalik Rustamov, director of the State Agency for Environmental Protection and Forestry of the Kyrgyz Republic, said in the statement.

For instance, after collaring the first snow leopard, researchers were able to analyze 45 kill sites from the predatory cat. This helped them to deduce that mother cats hunting for food for their cubs need to catch prey at least every three to four days.

The fact that there is enough habitat and prey to support female snow leopards and their babies, and that they feel safe enough to breed, are signs that conditions in Kyrgyzstan are improving for the big cats, the researchers said. That may be good for the broader snow leopard population, as the snowy heights of Kyrgyzstan potentially serve as a critical corridor through which the majestic cats can travel from the northern end of their habitat in Russia to China, where more than half of the snow leopards live, according to the researchers.