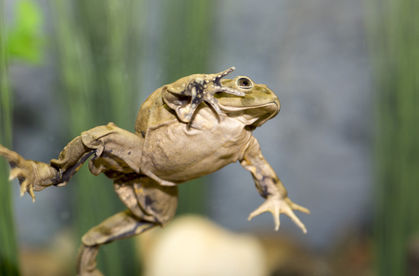 This juvenile frog at the Denver Zoo is small enough to fit in the palm of a hand, but Lake Titicaca frogs can grow to the size of dinner plates.

DENVER - In a back room of the Tropical Discovery exhibit at the Denver Zoo, it's feeding time for 17 of the most critically endangered frogs in the world.

The strange, baggy-skinned amphibians leaping for red wiggler worms are Lake Titicaca frogs (Telmatobius coleus), which can grow to more than 2 pounds (1 kilogram) and are found only in the lake along the Peruvian and Bolivian border that gives them their name. This unadorned room - and the public exhibit down the hall, which houses three more frogs - is the only place to see them in the Northern Hemisphere.

For a species that manages to survive in a 50- to 60-degree Fahrenheit (10 to 17 degrees Celsius) lake at 12,500 feet (3,811 meters) elevation, the Lake Titicaca frog hasn't, traditionally, gotten much respect. It's been given the nickname "scrotum frog" for its folds of skin, which allow it to absorb oxygen from its aquatic environment. In 2013, it was the runner-up in a "world's ugliest animal" contest put on by the United Kingdom's Ugly Animal Preservation Society. And worst of all, the survival of the Lake Titicaca frog is threatened because it is the main ingredient in Jugo de Rana, or frog juice - a concoction of blended frog, maca root and other ingredients - that's supposed to improve one's sex life.

The aphrodisiac reputation is unearned, said James Garcia, an outreach programs specialist for the zoo. The frogs don't affect sexual function or fertility, he said, though maca root might.

Nor, as far as I can tell, do the frogs earn their reputation for ugliness. The juveniles now in the Denver Zoo collection are still small enough to fit in the palm of a hand. They have permanent smiles and dark, forward-facing eyes that likely help them hunt but also give them a sweet, cartoonish look. My first encounter with these frogs was during a snowy weekend in late March. With family visiting from out of town, we loaded up for a visit to the zoo, with me hyping these weird, critically endangered frogs I'd read about. No one was particularly enthusiastic, until they saw the exhibit and had to admit that the little guys were pretty cool. [Watch: Video of Lake Titicaca Frogs' Awkward Mealtime]

That's the reaction the Denver Zoo is hoping their rare display of these frogs will engender - both in Colorado and back in Peru.

"We're trying to teach people to take pride in this animal, to understand this animal," Garcia told me. "Without them saving it and learning about it and taking pride in it, it's not going to be saved."

The Denver Zoo's involvement in the crusade to save the Lake Titicaca frog started nine years ago. Tom Weaver, assistant curator of reptiles and fish, had been working on a project to save the Panamanian golden frog, but that species had attracted plenty of outside interest, so he and his colleagues started looking for lesser-known species to focus on. Through the International Union for Conservation of Nature (IUCN) Amphibian Ark, Weaver got in touch with wildlife veterinarian Roberto Elias, a professor at Cayetano Heredia University in Lima.

"He started sending me pictures of confiscated frogs that were ending up in the markets of Lima and Cusco and some of the bigger cities," Weaver said.

Along with Elias and other conservationists, Weaver and his team built a laboratory at the university to house confiscated frogs. They saved two out of 4,000 or so - "When they get them confiscated in the markets, they're usually on their way out anyway," Weaver said - and also helped the Huachipa Zoo in Lima set up an amphibian habitat. That zoo was the first to breed the Lake Titicaca frog in captivity, in 2010, Weaver said.

At the lake itself, the researchers have three teams of scientists doing population surveys of Lake Titicaca frogs. They're also working on local education and outreach. Members of the team visit schools around the lake to teach students about the flora and fauna, Garcia said. A public health campaign warns Peruvians that frogs caught from the lake can have cholera and other diseases that make them unappealing for consumption. And there are efforts to open up alternative livelihoods for those living around the lake who might otherwise turn to poaching, Garcia said. In the Denver Zoo gift shop, visitors can buy frog-themed crafts made by Peruvian artisans.

The frogs themselves landed in Denver in November 2015, transported in a cooler and kept chilled with ice. Three are now on display in a tank lined with river rocks. These were chosen because they were thought to be the biggest of the bunch, Weaver said.

But their size was an illusion.

"We fed everybody, came back and were like, 'Those aren't the biggest ones,'" Weaver said. The frogs had eaten so much that they'd bulked up temporarily. [40 Freaky Frog Photos]

Weaver isn't sure how big the captive frogs will get, but some Lake Titicaca frogs in the wild grow to the size of dinner plates. They've been known to live for up to 20 years in captivity. Their lifestyles are entirely aquatic, and their signature move is a funny little push-up jump that moves water along their skin folds so that they can absorb more oxygen.

Having Lake Titicaca frogs in captivity has been illuminating, Weaver said. The amphibians eat ravenously, he said, and seem to have fast metabolisms. In their native environment, they probably spend all day plucking snails and worms off river rocks, he said. In captivity, they're picky eaters that will scarf a bit of food one moment and spit it out the next. So far, they're thriving on string-like red wigglers, Weaver said. During my visit, he tested a couple larger earthworms in the tanks. A couple frogs made an effort, but ultimately spit the worms out, pulling the wigglers from their mouths with their front feet.

Keeping the frogs alive in captivity isn't difficult, Weaver said, as long as the environment is just right. The water in the tanks is chilled to 60 F (15.5 C). Like Lake Titicaca water, it has a basic pH (non-acidic) and is high in dissolved minerals. Weaver hopes to breed the frogs eventually, but isn't in a rush.

"If we start seeing spawning or amplexus [in which a male grasps a female for external fertilization of her eggs], or we're starting to see egg masses, we're going to be doing a lot of work on weights," Weaver said. "We're going to be taking data on everything." [See Photos of the Only Lake Titicaca Frogs in the US]

Some of this data will likely feed back into the zoo's conservation efforts. Lake Titicaca frogs aren't just at risk from poaching. Every year, Weaver said, the lake sees major die-offs from pollution runoff, and egg-laying females seem particularly affected. Introduced fish species like trout also threaten the frogs. And there's the ever-present specter of chytrid fungus. This highly infectious fungus invades the skin of frogs and essentially dehydrates them to death. It has devastated frog populations worldwide, and threatens to do the same to salamanders. The impact is dramatic.

"When I was in Panama working with the Panamanian golden frog, we were doing surveys up until 2005 to where you'd see frogs everywhere, and then in 2005, everything was dead," Weaver said. "You'd have frogs falling out of trees."

The Denver Zoo frogs, descendants of amphibians rescued from Peru's markets, were swabbed and found to be free of the fungus. But wild Lake Titicaca frogs have been found living with chytrid on their skin, Weaver said. They may be able to coexist with the infection until environmental factors, like pollution or temperature fluctuations, weaken them. That means the fungus may be a factor in the yearly frog die-offs. [Mug Shots: 10 Lost Frogs]

Frogs are important because they're the environmental equivalent of canaries in coal mines. "They are pretty much sponges," Weaver said, absorbing everything in the water. That makes them crucial indicators for water and habitat quality. It also makes them vulnerable to the major changes that humans are wreaking on the ecosystem.

"We're seeing populations of amphibians changing," Weaver said. "It's the first time in human existence we've seen an entire class of animals that are doing this."

No one knows how many Lake Titicaca frogs are left in the wild. Along with local high-school students, the Denver Zoo is building a small remotely operative submersible that will be able to dive 328 feet (100 meters) deep in the lake. Currently, Garcia said, researchers can scuba dive down to only about 33 feet (10 m). In the 1970s, famed oceanographer Jacques Cousteau dove to 100 meters and estimated that billions of Lake Titicaca frogs lived in the lake.