Did 1 Sexually Active Tortoise Really Save His Species? 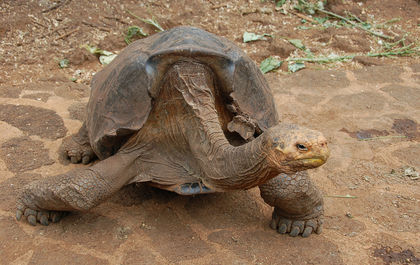 Diego, a centenarian tortoise, has fathered an estimated 800 offspring.

A giant tortoise named Diego may be more than 100 years old, but his libido is the stuff of legend. The centenarian tortoise has fathered an estimated 800 offspring, leading many to claim he single-handedly saved his species from the brink of extinction. But scientists say it was not Diego's prolific sex drive alone that saved the giant tortoise species.

Fifty years ago, only 14 members of the giant tortoise subspecies Chelonoidis hoodensis lived on the island of EspaÃ±ola in the GalÃ¡pagos archipelago - 12 females and two males. In the 1970s, when researchers were looking for a mate for another famous giant tortoise, Lonesome George, a third male of the rare species was discovered living in the San Diego Zoo. Now known as Diego, the tortoise was moved to a GalÃ¡pagos mating center.

Linda Cayot, science adviser to the Galapagos Conservancy - which works with the the Charles Darwin Foundation and the Galapagos National Park, where the mating center is located - said the tortoises were divided into two corrals: one with Diego, a younger male and a handful of females; and another with the third male and the remaining females. [Image Gallery: Fossilized Turtles Caught in the Act]

"The females kept producing eggs, and they were incubated and reared to about 5 years old and then returned to EspaÃ±ola," Cayot told Live Science. "So that went on for years, and nobody knew that [Diego] was the dominant father until the geneticists got involved."

Blood samples from the tortoises that had been released back on EspaÃ±ola revealed their parentage. Although Diego fathered more than 800 offspring and his corral mate fathered very few, it was actually the third male who had the most prolific breeding career, fathering twice as many offspring as Diego, the scientists said.

"Diego is a very charismatic tortoise, and he certainly does a lot of the mating," said James Gibbs, a conservation biologist at the SUNY College of Environmental Science and Forestry (ESF) and an adjunct scientist for the Galapagos Conservancy. "But Diego actually only does about half of the mating another male does, E15, that doesn't have a fancy name or a fancy personality. And the third male does essentially nothing."

Thanks to these two virile tortoises, about 2,000 tortoises have been released back on EspaÃ±ola. About 50 to 60 percent of those tortoises are still alive - which is considered a high success rate - and they have been reproducing naturally on the island since 1990, Cayot said.

The numbers alone are considered "one of the most successful conservation stories," Gibbs said. However, the genetic testing raised a concern: a lack of diversity.  Low genetic diversity limits the population's ability to adapt to changing conditions and can cause health issues due to inbreeding, the researchers said. Moving forward, the breeding center will divide the tortoises into three corrals, so there's no competition among the males for females. They will also pair the males with females they haven't mated with before.

Cayot explained that, in the researchers' conservation efforts, "phase 1" focused on growing the population from the original 15 giant tortoises in the mating center. Now that a small but healthy population of the tortoises has been established, "phase 2" will focus on increasing the genetic diversity of the animals to ensure their long-term health and survival. [Images: 100-Year-Old Lonesome George Tortoise Goes on Exhibit]

Another aspect of this second phase is focused on the health of the island as a whole.

"Things are looking really good for the tortoises," Gibbs said. "In terms of their numbers, they're recovering quite well, but as their numbers grow on the island, they're going to experience some constraints."

On EspaÃ±ola, human influence affected not only the tortoise population but also the island's vegetation. Humans' introduction of goats to the island in the late 1800s, for example, played a role in destroying much of the tortoises' habitat. Gibbs said key plants, such as large tree-like cacti - which the tortoises rely on for shade, water and food - are dying off, and woody plants have grown to a density not typical for the area.

The tortoise population on EspaÃ±ola is stable, Gibbs said, so conservationists are now looking into options to help support the ecosystem's revival as well. In the meantime, as tortoises are born and reared at the breeding center, they are being placed on the neighboring island of Santa Fe, which lost its tortoise population 150 years ago.

"They were released for the first time last year, and it's very exciting because recovering this one species has also enabled us to recover the ecosystems of another island," Gibbs said. "Santa Fe also provides an insurance colony for the EspaÃ±ola population."

There is still much work to be done as conservation efforts across the GalÃ¡pagos continue, Gibbs said, but the EspaÃ±ola tortoises represent an important success story.

"Those small numbers would have pulled down most other species," Gibbs said. "But there's something about tortoises that made this work."